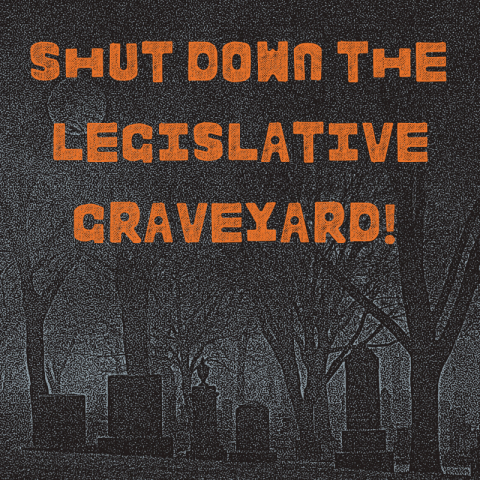 Halloween is especially scary this year. Not because of the neighbor’s zombie decorations – and certainly not because of all the (adorable) miniature vampires at your door for candy...

Nope. This year, Halloween is off-the-charts frightening because of U.S. Senate Majority Leader Mitch McConnell’s LEGISLATIVE GRAVEYARD that is actively harming women, working families, the LGBTQ+ community, the immigrant community, and our democracy.

What’s this graveyard? Well, the U.S. House of Representatives has passed over 100 terrific bills this session, including critical legislation that would enhance election security, help close the gender wage gap, raise the minimum wage, and reauthorize the Violence Against Women Act.

But instead of giving the U.S. Senate a chance to vote on these bills – many of them bipartisan – U.S. Senator Mitch McConnell chose to become the self-proclaimed “grim reaper” of the U.S. Senate by burying all promising legislation in his graveyard.

>>> Have no fear – we won’t be spooked by the U.S. Senate’s “grim reaper”! Tell U.S. Senator Mitch McConnell to shut down his legislative graveyard and let the Senate do their job!

Here is a snapshot of some of the many important bills that currently sit in U.S. Senator McConnell’s legislative graveyard:

H.R. 6 - American Dream and Promise Act would provide Dreamers and immigrants eligible for Temporary Protected Status and Deferred Enforced Departure with a pathway to citizenship and permanent protections from deportation.

H.R. 7 - Paycheck Fairness Act would strengthen equal pay protections for women by expanding upon the Equal Pay Act of 1963 and the Fair Labor Standards Act.

H.R. 986 – Protecting Americans with Preexisting Conditions Act would prohibit the Trump Administration from implementing guidance released in 2018 that weakens protections for pre-existing conditions.

H.R. 2722 - Securing America’s Federal Elections Act would close dangerous gaps in our election systems and brings our election security into the 21st century.

Wow! Far from being spooked, the U.S. House of Representatives has been busy advancing legislation that would boost our nation in so many ways. On the other hand, U.S. Senator McConnell’s legislative graveyard doesn’t just represent his inaction – it represents real harm that he is causing women, working families, the LGBTQ+ community, the immigrant community, and our democracy.

>>> This Halloween, stand up to Senator Mitch McConnell and tell him to CLOSE the U.S. Senate’s legislative graveyard and let our Senators have a vote. Enough is enough!

It’s time for Senator Mitch “Grim Reaper” McConnell to do his job. We can’t and won’t wait any longer.

Together, we are a powerful force for women and families.