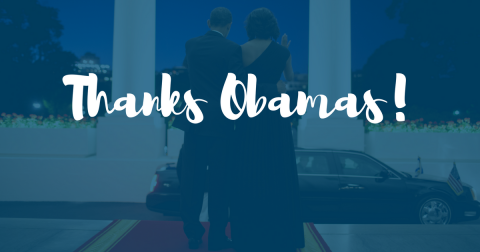 #YesWeCan and #YesWeDid – Say farewell & thank-you to the Obamas!

“For now, whether you are young or whether you're young at heart, I do have one final ask of you as your president. The same thing I asked we take a chance on eight years ago. I am asking you to believe, not in my ability to bring about change but in yours.” – President Barack Obama

This week, President Obama delivered his farewell address from Chicago with a heartfelt reminder that while we’ve accomplished so much together over the last eight years, we still have a lot of work to do. He also reminded us that we have the power to make the changes we seek.

As he said, “For every two steps forward, it often feels we take one step backward. But the long sweep of America has been defined by forward motion.”

We’re certainly grateful for the many steps forward we’ve taken with President Obama over the last eight years. And while it’s important to look to the future and stay vigilant, it’s also important to take a moment and look back and say "Thank you!" to the Obamas.

Submit your very own thank-you note to President Barack Obama and First Lady Michelle Obama! We’ll deliver it to the White House before they leave office!

Before the President and First Lady Obama rejoin our fight to lift families and our nation as fellow private citizens, take a moment to share your very own #ThanksObamas note!

*We will deliver it to the White House before they leave office!*

Thanks, President Obama. You rallied us to believe that #YesWeCan! And together, under the President’s vision of hope, we did.

MomsRising members have been working side by side with President Obama since before he was even in the White House. Did you know that he hosted MomsRising’s very first “Moms Meetup” on Capitol Hill when he was a U.S. Senator? It’s true! And he went on to champion healthcare, paid family leave, sick days, affordable childcare, overtime pay, gun violence prevention, sentencing reform, healthy school meals, and other core MomsRising issues from the White House, often inspired in part by the stories and experiences of MomsRising members from across the nation.

And we were inspired by him. President Obama is a community organizer by trade – and our first Black president. Many children of color have only ever seen themselves reflected in our nation’s highest office. That holds more value than we can know.

How did President Obama and First Lady Michelle Obama inspire you over the last eight years? How did their progressive leadership benefit your family and your community?

Our country is immeasurably stronger because of their vision of economic prosperity, racial justice, gender equality, and peace.

And together we are stronger for their service.