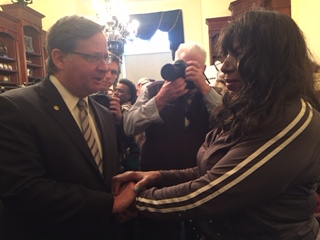 Will We Remember Flint?

Check out this great piece from the Coalition on Human Needs' new Communications Director David Elliot:

Rachel Mingo has 11 reasons to be concerned about the lead poisoning scandal in Flint, Michigan.

First, there’s her and her husband, who together recently bought a home in Flint. Then there’s her 2-year-old daughter Madilyn and her three-year-old son Maverick. Finally, there are her seven brothers, all single, all between the ages of 21 and 32, and all of whom live in Flint.

When she first heard about the contaminated pipes, “The very first thing we thought was, we have to get out of here. We have to leave because they are poisoning our children. It’s hard to sleep when you think you could be ruining your children’s lives.”

Rachel, a fifth-grade school teacher, had her children tested for lead poisoning. The tests came up negative; so far, so good. But she nonetheless worries about her brothers, who she said seem to think only children are at risk. “I’m trying to make them aware of what is going on,” Rachel explains. “I’m giving them the extra bottled water I have. I don’t want them to face health problems just because they live in Flint. They are not even aware the water is poisoning everything.”

Rachael’s mother, Gwen, lives a little more than an hour away from Flint, in Detroit. A self-avowed defender of civil and human rights, Gwen hopped on a bus in Detroit and rode all night long to Washington, D.C. to attend a rally and prayer vigil on behalf of Flint’s citizens.

Congress is now considering emergency legislation to provide hundreds of millions in funds (some say that actually more than $1 billion is needed, but at this time, that level of appropriation is not being seriously considered). If you haven’t already done so, please chime in here to demand that Congress take action.

But neither Rachel nor Gwen are very optimistic.

Adds Gwen: “There will be no quick fix for Flint and only the wealthy will survive.”

In early March, both Democrat and Republican candidates for President were scheduled to participate in debates, one in Detroit and the other in Flint. And on Tuesday, March 8, voters from both parties go to the polls in Michigan.

Let’s only hope they remember Flint.