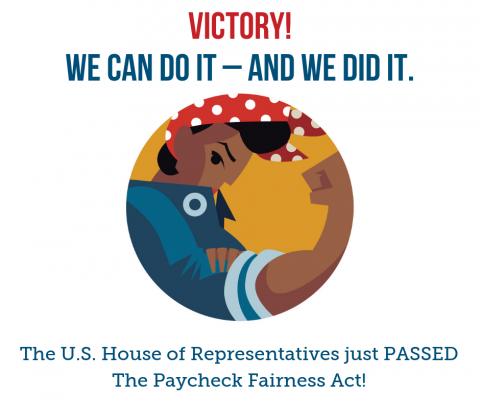 Now we’re charging full speed ahead toward the U.S. Senate with our campaign for equal pay! Tell your U.S. Senators to co-sponsor and advance the Paycheck Fairness Act.

This new 116th Congress, the most diverse in history, is the best shot we’ve had in years to pass the Paycheck Fairness Act through both the House of Representatives and the Senate.

Why do we need the Paycheck Fairness Act? Because right now, women of color and moms still earn far too little compared to white men and dads. Moms are typically paid just 69 cents for every dollar paid to dads, while Latinas are paid 53 cents, Native American women 58 cents, Black women 61 cents, and Asian women 85 cents for every dollar paid to white men. Moms of color experience double wage hits. Overall, women make 80 cents on the dollar.

The Paycheck Fairness Act will help close the gender wage gap. This smart policy would close loopholes in the Equal Pay Act and:

*** TAKE ACTION: Let your U.S. Senators know that you expect them to support and PASS the Paycheck Fairness Act!

This has to stop! There’s real momentum behind equal pay in Congress and we need the Paycheck Fairness Act to get voted on by the U.S. Senate.

Three-quarters of mothers are now breadwinners for their families, so when moms make less, more women and children fall into poverty. And this is not a small number of impacted people: nearly a quarter of children are now living in poverty in our nation.

Equal pay is critical for families and our economy! Urge your Senators to advance the Paycheck Fairness Act ASAP!

Together, we’re a powerful force for women and families.