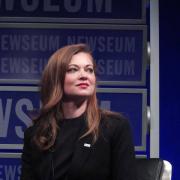 Carolyn McGourty Supple is executive director of The Press Forward, a nonprofit and nonpartisan initiative whose mission is to advance culture in the media and news industry through training, research and education. In her role, Carolyn oversees Press Forward’s work with newsroom leaders, journalists and students on issues surrounding harassment and workplace rights, the leadership pipeline and the future of work.

A former journalist for ABC News, Carolyn supported the network’s flagship broadcast “World News with Charles Gibson,” “The Barbara Walters Specials,” and the first broadcast on energy and environment, “Focus Earth with Bob Woodruff.” Before cofounding The Press Forward, Carolyn served as an experienced management consultant for Booz Allen Hamilton’s commercial strategy and strategic innovation group practices, where she focused on helping clients respond to digital disruption and culture change. In this role, she piloted artificial intelligence and open-source software projects, established the firm’s tech scouting practice in Silicon Valley and developed strategic plans for commercial, nonprofit and government clients.

Carolyn received her Master in Public Policy from Harvard University, where she was a student fellow with the Shorenstein Center for the Press, Politics and Public Policy and Belfer Center for Science and International Affairs. She has a B.S. in Journalism from Cal Poly, San Luis Obispo. She lives in Silicon Valley with her family.

March 17, 2020
While health care workers and many others are scrambling to figure out child care arrangements for children amidst school closures across the country, those who have been sent home to telecommute face a child care challenge too. Suddenly, parents find themselves trying to work remotely, with bored kids underfoot. As a co-founder of The Press Forward and a mother, I understand remote work and how kids can distract parents from work. When we started our nonprofit, we were — and still are — a remote team working across cities and time zones while juggling multiple professional responsibilities...
MomsRising Together