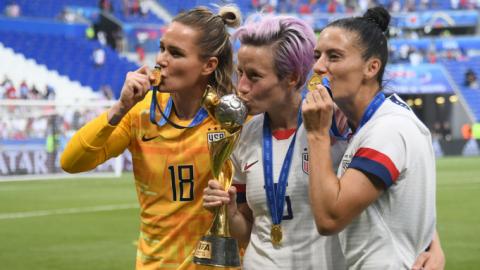 We’re calling a red card on the U.S. Soccer Federation!

Why? It’s bad enough that they don’t pay the national men’s and women’s soccer teams equally, but now they have hired not one, but two (!!!) lobbying firms to actively lobby against equal pay on Capitol Hill.

Our jaws dropped when we saw the news that the U.S. Soccer Federation hired two Washington, DC lobbying firms to counter the U.S. Women’s National Team’s justified claims that they are paid less than players on the men’s team – as little as 38% of what men’s team members make even though the women’s team brings in more revenue than the men’s team and has more viewers.

As far as we’re concerned, that’s offside and out of bounds. We call a foul!

We can think of plenty of ways those dollars would be better spent by the U.S. Soccer Federation rather than lobbying against equal pay and distorting the facts about the wage gap the women’s team faces.

While on Capitol Hill, the U.S. Soccer Federation lobbyists spread misleading and inaccurate information that didn’t account for the fact that the women’s team played 20 games last year (winning 18 and drawing two), while the men’s team only played 11 games (winning three, drawing three, and losing five).

QUICK SIGNATURE HERE → Say you’re with the U.S. Women’s National Team in the fight for equal pay and tell the U.S. Soccer Federation to STOP their ridiculous lobbying.

Fresh off their incredible fourth World Cup win, the Women’s National Team has a lot of momentum in their fight for equal pay, including newly introduced federal legislation. The Athletics Fair Pay Act, introduced by U.S. Senator Feinstein and U.S. Representative Matsui, would require U.S. Soccer to pay the men’s and women’s teams equally.

Now we have a chance to join their fight and be on their team by making some noise and making sure that the U.S. Soccer Federation hears loud and clear that the fans of soccer, and equal pay, are not impressed by these moves.

>>> Add your name! Tell the U.S. Soccer Federation that we won’t stand for their unequal pay practices or their lobbying against equal pay measures!

A spokeswoman for the women’s team players said that they were “stunned and disappointed” that U.S. Soccer “would spend sponsor dollars and revenue to advocate against laws that ensure that women are paid equally to men.”

The men’s national team found U.S. Soccer’s actions to be, “disappointing but not surprising.”

Whether you work on a factory floor or a soccer field, equal pay should be the name of the game.

Urge U.S. Soccer to drop the lobbyists and instead use their resources to pay the men’s and women’s teams EQUALLY!

Together, we’re a powerful force for women on and off the field!