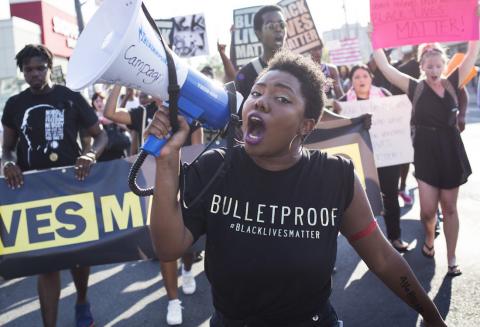 The current Trump administration is undeniably slashing away at our fundamental rights. There is no question that we are facing the greatest onslaught of racist, misogynist and classist violence in recent U.S. history. This fight is a planetary fight.

The reality is overwhelming; however, it is our duty to fight. Our resistance must be determined to dismantle the policies, institutions and culture that Trump, Jeff Sessions and others in his administration embolden.

We must actively and collaboratively create the world we want to see, enjoy and leave for future generations. Nas said “Action Speaks Louder Than Words.” Here are some ways we can all take action, support solid on-the-ground work and participate.

1. Demand Healthcare for All

We live in a country where too many people have no access to healthcare, 48 million, according to the US Census Bureau’s 2012 report. We know communities of color and incarcerated people are disproportionately impacted as health care is underfunded and placed in corporate hands. The Trump administration’s rollbacks on the Affordable Care Act (ACA) guarantee that this number will increase. Where’s the justification for not ensuring that people have access to universal quality health care? We need to follow and support organizations like Momsrising, a coalition of mothers and other concerned people dedicated to defending our right to health care from paid sick days to toxic-free environments for our communities.

“We understand that when Black people in this country get free, the benefits will be wide reaching and transformative for society as a whole,” wrote BLM co-founder Alicia Garza in A Herstory of #BlackLivesMatter. We must have Black power in this country and globally. Our community-led organizations and political campaigns must always prioritize this. Cooperation Jackson, based in Mississippi, is at the forefront reconfiguring Black communities in the Deep South and their relationship to political power and economic access through solidarity economies.

3. Build an Abolitionist Movement and Defund Police and other Law Enforcement Agencies

Abolition is necessary for our communities to be free. As the documentary 13th points out, imprisoning minorities is a new form of slavery. Not only does abolition call on us to dismantle the systems, institutions and practices that oppress us but also, abolition requires us to think and act critically in accordance with what we want.

I came up in an organizing tradition that calls for the divestment of resources into police, prisons, and other law enforcement. Now, across my home state, we are expanding our California Justice Teams network, a coalition pushing for key legislation to reduce the constitutional liberties of police and law enforcement and reduce state spending on the prison industrial complex.

The Anti-Police Terror Project based in Oakland is another example of uniting a variety of institutions and community members under a Black-led multigenerational and multi-racial coalition to end state-sanctioned violence.

BLM has grown into a movement spanning more than 40 chapters in the U.S. and abroad. Our work grows more and more by the minute, from local legislative campaigns to mass mobilizations and healing justice projects. We’re building a framework for a society that uplifts and guarantees equitable conditions for Black communities.

Similarly, the Movement for Black Lives (M4BL) includes organizations, individuals and networks committed to Black power and abolishing state violence in our communities, among other issues. Together, our networks have built the beginnings of contemporary Black-led political, organizational and economic institutions in this country.

The work organizations like BreakOut in New Orleans and the Marsha P. Johnson Institute are fighting every day against transphobia and white supremacy. Centering the leadership of transwomen, gender-queer, gender-non-conforming and women of color—especially Black women—is key for our movements to make key victories. At the same time we must also work to decolonize the behaviors, perceptions and actions in our families, communities, organizations and policies.

6. Fight for The Planet

We must secure a planet that our children and their children can exist on. Just recently the Trump administration pulled out of the Paris Agreement. This doesn’t just impact the U.S.; it impacts the entire planet and all humanity. Historically the U.S. has allowed for corporations to wreak havoc on the globe, making this country one of the main purveyors of climate change the world over.

Many of us were on the front lines with the community of Standing Rock as we went toe-to-toe with the police of North Dakota to protect tribal lands, clean water, and challenge the Dakota access pipeline. The Indigenous Environmental Network is a great resource for action around these issues.

If you’re not already engaged in grassroots work, research these groups, sign-up for updates, attend their events, actions and support their fundraisers.

Ultimately, we need you to join an organization or create one of your own to support the building of a new world.

Patrice Khan Cullors is cofounder of the Black Lives Matter Network, and the author of When They Call You a Terrorist: A BlackLivesMatter Memoir.

This piece was originally published at MassAppeal and cross posted with author permission.