The Year Climate Change Became Real to Me 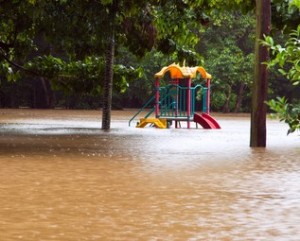 It started this summer... conversations on the playground, on my favorite blogs, at work: Is this climate change? The hottest summer on record, Midwest tornadoes and floods, out-of-control forest fires. And this after a summer hurricane (Irene) and freak ice storm on Halloween 2011 had crippled my suburban Boston neighborhood and sent 100-year-old trees crashing into our houses. Oh and don't forget, we had hardly any snow last winter. This must be it, finally, moms in my formerly sheltered area thought. Climate change is here. What will it mean for my family?

And now there is Sandy. I knew it when I heard they closed the Holland tunnel from lower Manhattan to New Jersey. I'm a Jersey girl and bridge and tunnel native. Never in my life had the tunnels been shut, much less flooded through. As a CNN.com headline said yesterday, we're living in a disaster movie. And we're all thinking, is this what life will be like from now on? How can we prepare?

Seven days before the election, I hope you will join me in taking stock. How does the vote you cast next Tuesday affect your family's safety in the face of the new "normal" climate?

Disaster coordination is one of the most vital functions of "big government," which is why Mitt Romney wants to eliminate it ... Mr. Romney not only believes that states acting independently can handle the response to a vast East Coast storm better than Washington, but that profit-making companies can do an even better job. He said it was "immoral" for the federal government to do all these things if it means increasing the debt.

"The idea of defunding FEMA, NOAA, and other essential agencies -- not to mention weakening the EPA -- is one of my biggest gripes against the current thinking of the GOP. Can't afford it? We can't afford NOT to keep these agencies solvent," my friend Donna Mills of SoCal Mom put it.

Last year's tornadoes that destroyed the town of Joplin, MO and took a big chunk out of Lambert airport were part of a record season. This year's heat wave and drought were especially awful, though, in the sense that they were slow-moving disasters that garnered little attention or aid compared to the instant devastation of a storm, and they destroyed so much of the food we grow here. Those of you who did not get a front row seat to the drought will still be seeing it in your grocery bills all winter.

The thought of going back to no energy regulation and limited government disaster relief scares the bejeezus out of me right now. Neither political party has been willing to face the political risks to deal with climate change, but a second Obama administration will afford the president and Democrats the political capital to deal with climate change in a real way. And at least they don't deny reality. President Obama's doubled production of renewable energy from wind and solar, while investing in over 15,000 clean energy projects across the country.

Mitt Romney's number one agenda item in his plan is to increase domestic energy production, aka "Drill Baby Drill." We can't afford this. Two or three days of Manhattan being shut should convince Wall Street of the efficacy of dealing with climate change now. Instead, Romney would cut funding and incentives for clean energy, and continue providing billions in subsidies to Big Oil companies.

We're here. This year climate change became real to a Northeastern suburban mom like me. We need to protect our federal disaster relief resources and deal with climate reality. NOW.