The Moment We Have Waited For

Rev. C.T. Vivian, legendary civil rights leader, believes young people today are inheriting the world at a unique crossroads in history and that “this is the moment we have waited for. When I say ‘we’ve’ waited for, I’m talking about humankind has waited for. I’m talking about all the great philosophers and thinkers have waited for this moment. We have lived like we have lived, blowing each other up, killing each other, stealing from each other, making a world that is not fit for human beings — we have lived that way because it’s been allowed to be.” But Rev. Vivian believes we are reaching a tipping point where many are realizing we just can’t go on this way and survive. I truly hope so for our children and grandchildren’s sake!

Rev. Vivian, a Presidential Medal of Freedom winner, leader in the Southern Christian Leadership Conference (SCLC), a confidant of Dr. Martin Luther King, Jr., and a role model for so many of us in the 1960s era of civil rights activism and still, has been and remains an indispensable long haul moral, racial and economic justice warrior. At 91 years young he has a crystal clear message for today’s young people and all of us. He inspired and challenged a receptive Children’s Defense Fund audience of college students when he said he is convinced this is the generation that will finally create new ways of solving social problems to make that new, better world we must build together with urgency and persistence. 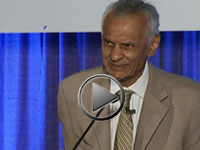 “The human drama of your time will not be a military drama . . . Even if they want it, it can’t happen, because we’ve come to the point that violence cannot solve human problems . . . We can’t live in an atomic world and think like we used to think in terms of how wars were fought, in terms of how men killed each other, because today, if we decide to live like we lived yesterday, none of us will live at all.” Instead, “we have to come with a different understanding of our relationships to the world around us, and that’s the most important thing of all . . . You can’t live in yesterday’s world. And I want you to be very thankful of that, because you are forming the new world to be and the old world has no place in it.”

Rev. Vivian believes “if we are wise, we will not allow any of us to treat the rest of us as though we were less than rather than more than.” And he looks to history to prove that hatred and violence always destroy more than they create and always turn back the clock of progress. “By the time the First World War ended and the killing was over, Europe was destroyed,” he said. “All the work and hope and dreams that went on before it were destroyed in the midst of it. Second World War, right, we did the same thing – we destroyed what we had worked for and hoped for and dreamed for. War cannot be used anymore because you can’t create the beloved community on yesterday’s understandings. We will destroy more than we create, and you can’t have the world you want that way. It’s up to us to create the world we really want.”

“The central task” he continued, “will be to remove violence as a means of solving social problems. When we really think of it that way, then we are on our way. The task will be different than before. We all dreamed of it. We sat in church and talked about it. We made songs about it. We talked about a new world coming. We talked about all of that, right? Now that it’s here, we’ve got to make it real.”

It’s up to us to create the world we really want . . . We’ve got to make it real. The 1960s Civil Rights Movement laid a foundation for the new world as ordinary people tired of injustice seized the moral high ground and confronted the racial violence surrounding them with controlled, disciplined, nonviolent action which allowed America to see there was another way to create change. When C.T. Vivian was jailed and beaten, he never wavered. He says: “Gandhi and the world he lived in changed because he used a different method and a different means. Dr. King changed America because he used a different understanding. He used a different way to move” and Rev. Vivian believes today’s young people can finish what his generation began.

His words have a special meaning and challenge today when violence as a conflict resolution strategy has become a daily threat internally and externally in this era of domestic and global terrorism; relentless gun violence in our nation driven by a powerful gun lobby that saps the lives of 30,000 human beings every year including thousands of innocent children; and out of control demagogic political discourse which encourages violence at home and fuels anger around the world by demonizing people who believe and pray differently from many of us. What is it going to take for enough of our political leaders and citizens to stand up and reject the old world view too often riddled with intolerance and hatred? When will a critical mass of citizens and leaders come together to build a new nation and world fit and safe for all of our children and confront those who fuel racial and religious intolerance within and without our borders? And how many of us will stand up and say no to the violence of coarse and careless political, racial, gender, or any rhetoric intended to demean another human being and that teaches our children we cannot disagree without being disagreeable?

The Bulletin of Atomic Scientists publishes a “Doomsday Clock.” In 2016, the clock has been set at 3 minutes to midnight as tensions between the U.S., Russia, North Korea and other nations, particularly those involved in conflicts in the Middle East, remain high and landmark climate change agreements have not yet evolved into the fundamental changes needed to ultimately arrest the problem and mitigate additional conflict and catastrophe. Rather than be discouraged or paralyzed by these disturbing concerns, we need to get up, organize, and mount without ceasing our strong nonviolent voices and witnesses to change the narrative of what it means to be a good steward of God’s earth and all of God’s peoples – and be determined to pass on a safer and better nation and world order to our children and grandchildren.