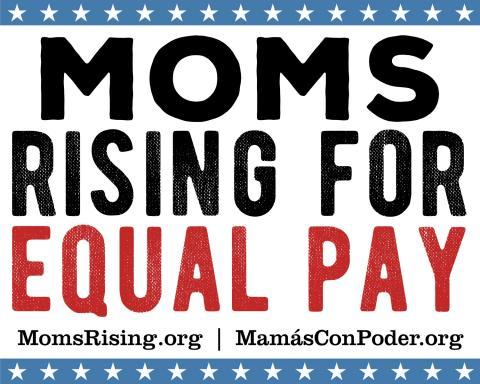 Image of text reading "MomsRising for Equal Pay." Below is the text in black: "MomsRising.org | MamásConPoder.org." A blue stripe with white stars border the top and bottom of the block of text.

$18 billion. That’s how much Washington women lose to the wage gap each year. Women of color lose the most. That’s the bad news.

➜ This is our year to raise the bar on equal pay in Washington State. Can you help us get there by sending a message to your elected representatives in Olympia?

Here’s the deal: The Equal Pay Opportunity Act will ensure that workers can share their wage or salary information with co-workers without fear of retaliation, like losing their jobs. This is a big deal because the fact is, most people don’t find out they’re being paid less for the same work until they have a water-cooler conversation with a friend at work. The EPOA will also create new protections for women who are tracked into lower paying jobs or unfairly passed over for promotions.

In fact, we just found out that the EPOA will be one of the very first bills to be heard in the Washington State House and Senate next week -- this is huge!

Can you send a letter to your elected representatives in Olympia urging their support for the EPOA this session? Just click here, it takes less than a minute to raise your voice in support of equal pay.

As legislators and their staff work in Olympia this week to get ready for next week’s start to the legislative session, we want to make sure they are hearing from constituents like you that equal pay legislation is a top priority this session.

Send a letter right to your elected representatives in Olympia by clicking here!

Opponents of equal pay policies like the Equal Pay Opportunity Act often brush off the wage gap as a myth – or as something that only exists because of the choices women make about jobs. But that is simply not the case. Even when controlling for job type, education, hours worked, etc. economists consistently find that the gap cannot be fully explained away by anything other than discrimination. And that gap occurs across occupations.

Last year, we made incredible progress on closing the wage gap when we passed paid family and medical leave for all, created new accommodation protections for pregnant workers, and expanded investments in affordable childcare programs.

We must continue this MOMentum by passing the Equal Pay Opportunity Act this year. Take action now!

When we all come together to raise our voices we can make real and meaningful progress. We saw that in 2017, and we can do the same in the year ahead.