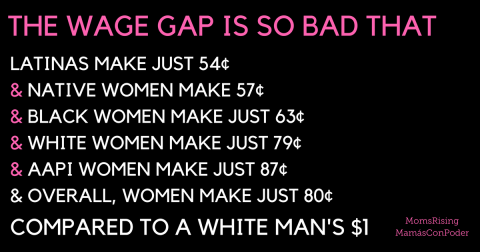 This horrifying wage gap is why we are raising our voices today to mark Latina Equal Pay Day, the day signifying that Latinas in the United States have to work ALL of 2016 and until November 2nd of 2017 to finally earn as much as white men earned in 2016 alone.

→ We can’t end pay discrimination and close wage gaps if employers can hide the fact they are paying women and people of color less than white men. *Sign this petition today and tell the Equal Employment Opportunity Commission it must move forward on developing a revised equal pay data collection now.

One of the best ways to ensure equal pay is to increase transparency around wages and ensure race and gender wage gaps can’t be hidden under the rug. But this summer, the Trump Administration’s Office of Management and Budget (OMB) blocked an important Obama-era equal pay initiative – the EEO-1 equal pay data collection – which would have required large corporations to report pay data by race and gender to the Equal Employment Opportunity Commission (EEOC). [3]

Meanwhile, it’s November 2nd, 2017 and Latinas in the United States have only just caught up to what white men were able to earn in 2016 alone.

This largest wage gap in the nation is a big deal for our national economy. According to a Nielsen report, 28 million U.S. Latinas are in “the driver’s seat of U.S growth.” [4,5] In fact, they are the fastest growing purchasing power market in the nation and they are the worst paid too. When Latinas are not getting paid fairly, the U.S economy suffers because we are not putting this money back into the economy.

As consumers, Latinos wielded more than $1.4 trillion in buying power in 2016. [6] That is larger than the GPD of Mexico and bigger than the economies of all but 14 countries in the world. [7] With Latina moms influencing 86% of purchasing power in their household, [8] they are changing the economic future of our nation.

It is very likely that this trend will grow since U.S. Latinos are the fastest growing ethnic group in the country and Latinas are expected to grow from 16.4 percent today to 25.7 percent in 2050. [9]

It isn’t until November that we come to Latina Equal Pay Day. These wage gaps are simply unacceptable!

Opponents of equal pay policies like the Paycheck Fairness Act often brush off the wage gap as a myth – or as something that only exists because of the choices women make about jobs.

But that is simply not the case. The opponents are wrong.

Even when controlling for job type, education, hours worked, etc. economists consistently find that the gap cannot be fully explained away by anything other than discrimination. And that gap occurs across occupations. [10]

This discrimination is happening through all occupations and across the pay scale spectrum. For instance, Latinas working in the highly-paid professions of lawyers, engineers, physicians or surgeons, Latinas earn .56 to the dollar compared to their white, non-Hispanic male counterparts in the same job. [11] At the opposite end of the pay scale spectrum, Latinas are overrepresented in some of the lowest wage jobs. And in those fields (home care workers, retail, service industry) Latinas working full-time, year-round, still face a wage gap –making .54 cents to the dollar compared to white, non-Hispanic men in the same fields. [12]

→ To close the wage gap for Latinas and other women in the United States we need the right tools and that means we need the EEOC to move forward on revising pay data collection.

Your voice is important. We need as many people as possible to sign on to this letter via the link above so the EEOC knows that moms, dads, and people who care about moms are paying close attention to this issue and are urging them to take action for the good of our families and our economy. If you know someone who could be impacted by the pay gap (and you probably do), please send this information to her, she will appreciate it!

***And also, after taking action, please make sure to forward this email to your friends and family — and/or copy the action link to your Facebook and Twitter pages. http://action.momsrising.org/sign/LatinaEqualPay2017/?t=9&akid=9798%2E2192549%2E3r7yCz

Unequal pay is hurting us all—and when we all come together to raise our voices, including to sign on to letters like this one, we can update our outdated policies and stop the wage gap.