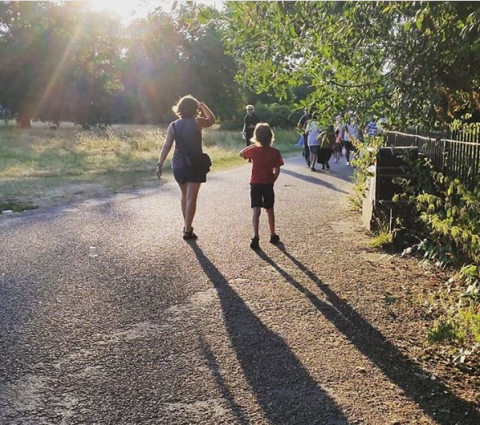 My son and I walking in Hyde Park last summer

Speak out to protect our right to choose!

When I was 17, I was looking forward to escaping high school and going to college when I unintentionally got pregnant.

I had an abortion.

Twenty years later, I became a mom. In that time, I didn’t just build a career and create a stable home—I found spiritual grounding as a Buddhist. I volunteered on municipal and nonprofit boards, and became an influential activist for a variety of causes. I made the world a better place and improved myself in the process. All of this allows me to be a better parent than I would have been when I was an unprepared teenager.

The more I talk about my abortion, the more I hear from others who had them, too. And, the more I realize that this experience I kept secret from even my closest friends at the time was actually incredibly common.

Over the last two years, with the new makeup of the U.S. Supreme Court, anti-abortion lawmakers have mounted a coordinated assault of unconstitutional bans in order to dismantle Roe v. Wade and attack people’s right to access safe, legal abortion. In fact, The U.S. Supreme Court will soon consider Louisiana’s June Medical Services, LLC v. Gee (PDF) case. If this clinic shut down law is successful, it would leave only one doctor to provide abortions for nearly one million women across the state, and would disproportionately harm low-income people and people of color.

*We need everyone to speak out to protect our right to choose! Please take action:

Most people who have abortions already have children, and research shows they do so mainly due to concerns for their families. Being able to safely and legally manage if, how many, and when we have children has been nothing short of revolutionary to move women toward economic, social and political equality .

To be clear: Banning abortion doesn’t end abortion—it just ends safe, legal abortion. While abortion care is still legal in our nation right now, we recognize this as the direct attack on bodily autonomy, economic freedom, and sovereignty that it is, and we recognize that its harmful impacts are compounded for those in low-income communities and communities of color.

The more people who speak out, the bigger our impact. Please take a moment to forward this email to your friends and family and share our story collection link on social media: https://www.facebook.com/sharer/sharer.php?u=https://action.momsrising.org/survey/abortion-stories/

Take Action!
Urge your national lawmakers to co-sponsor the EACH Woman Act to repeal the Hyde Amendment