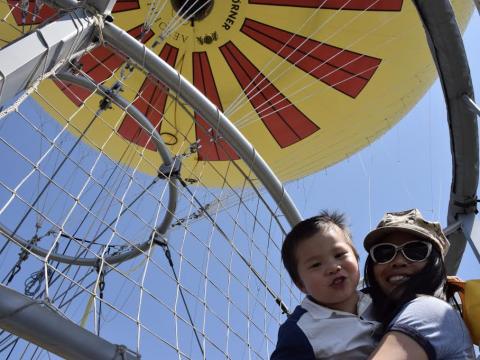 To-wen Tseng
Share This
Add your voice to the comments
MomsRising turns 10 years old this month! That’s a decade of gains of women, mothers and families. This makes me so excited that I have to write something about it.
I’ve been with MomsRising for three years. Three years ago this month, my son turned five month old and I’ve been back to work for two months after a three-month-long maternity leave. That two months were tough. I chose to breastfeed, which my company did not support. We didn’t have a nursing room, even though California law requires appropriate reasonable space for pumping. I had to pump in the restroom. When I tempted to wash my pump parts in the kitchen, some of my colleagues would say, “don’t wash your dirty panties in the office.” I reported that to Human Resources, but they never dealt with it. I spoke with my supervisor, but he insisted that I was overreacting, that I had a personal issue.
Stressed and helpless, I turned to Internet for some kind of support. I wasn’t sure what I was looking for, but I find MomsRising.org when surfing the web. I saw a “share your story” button on the homepage, so I wrote about my unfortunate experience. That was a totally disorganized essay, filled with complaints and was actually very annoying, but I needed to get it out. Without thinking twice, I submitted it.
I immediately felt better. Later I decided to quit my job and sued my employer for sexual discrimination.
To my surprise, I got an email from Anayah of MomsRising a couple of days later. She comforted me with warm words and asked if I would like to blog with MomsRising.
I was cheered. Of course I’d love to blog with MomsRising. I was a working journalist but was about to lose my job. I would have plenty of time to write about what I really care about.
My first post “How to Pump at Work Like a Supermodel” was up in that December. My case was settled next August, and I donated part of the financial compensation to MomsRising.
Since then I’ve been getting inspiration and encouragement with like-minded moms at MomsRising. When FAMILY Actwas introduced, I used the MomsRising template letter to write to my representative and ask the to support the bill. When children in my Sunday School were being fed candies, I organized a documentary screening to raise awareness on healthy eating with the help from MomsRising’s Good Food Force. When some kid told my child “Trump will kick you out of here” at our neighborhood playground, I turned to MomsRising Facebook page for support.
My son is now three years and four months old. The days of breastfeeding were long, but the years were short. He weaned himself one year ago; I still blog about breastfeeding rights at MomsRising. As he grow, I started to blog abouthealthcare, childcare, and early education.
One thing I really like about MomsRising is that the mothers here are not just rising for themselves, their own children and own families. They are rising for all the women, all the mothers and all the families in the country. I know some parents who mobilized to fight back on Epi-Pen price increasing are fully insured; the higher prices don't affect them. Some parents who support FAMILY Act live in California; they already have paid family leave.
MomsRising is now million-member-strong, with moms (and dads!) rise together to change the world. I may not be contributing much, but am certainly proud to be part of the movement. Happy birthday MomsRising :)