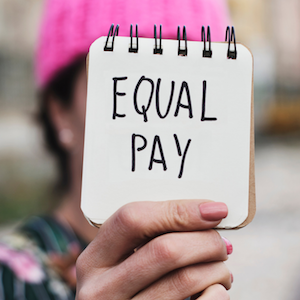 Have you seen all the “New Year, New Me” memes? I’ve got a better one: New Congress, New Chance for equal pay!

→ TELL YOUR MEMBERS OF CONGRESS: Co-sponsor the Paycheck Fairness Act!
*** The more co-sponsors the bill has before introduction, the stronger its chance of passing!

Why do we need the Paycheck Fairness Act? Because right now, women of color and moms still earn far too little compared to white men and dads. Moms are typically paid just 69 cents for every dollar paid to dads, while Latinas are paid 53 cents, Native American women 58 cents, Black women 61 cents, and Asian women 85 cents for every dollar paid to white men. Overall, women make 80 cents on the dollar.

The Paycheck Fairness Act will help! This smart policy would close loopholes in the Equal Pay Act and:

URGE YOUR MEMBERS OF CONGRESS to co-sponsor the Paycheck Fairness Act today!
*We’ll deliver these signatures ASAP and just in time for the planned introduction of the bill in a few weeks.

This has to stop! We need the Paycheck Fairness Act to be reintroduced with strong support from our members of Congress.

As his first job within the field he was offered $41,000 a year while I was offered only $35,700 a year, a whopping 13 percent less! We both naturally believed that I would actually earn more than him for several reasons: Prior to graduate school, I worked in the field for five years, had outstanding references and held a California Pupil Personnel Services Credential, all of which substantially "beefed" up my resume in comparison to my husband's. And yet, my salary offer was more than $5,000 less. The only reasons we could possibly think of were two other "straightforward" differences: I am female and Chinese American. My husband? White and male.”

Don’t waste any time! Tell your members of Congress to co-sponsor the Paycheck Fairness Act!