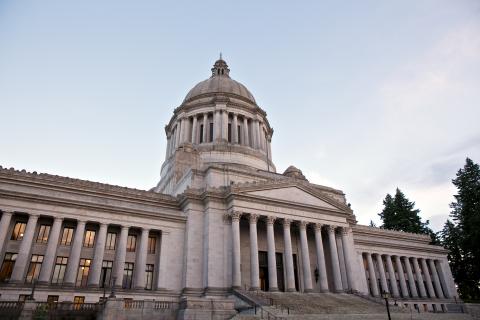 Today, moms, parents, and advocates gathered in Olympia to testify in strong support of Senate Bill 5961 -- a bill that will fundamentally change the structure of Washington's tax code by creating a capital gains tax on the wealthiest Washingtonians and funding the Working Families Tax Credit.

Click here to send a quick message to your State Senator urging them to include a strong capital gains tax and Working Families Tax Credit in their final budget package!

After years and years of work, the Washington State Legislature is seriously considering major reforms to our state's upside-down tax code with several new policies proposed in SB 5961. Included in this bill is an 8.9% tax on capital gains and funding for the Working Families Tax Credit, an expansion of the federal Earned Income Tax Credit for low- and moderate-income families.

41 states -- 41 states! -- have a capital gains tax. Washington is not one of them. This tax would only affect the richest 1% of households because most capital investments will not be taxed. Retirement investments in pension, 401K, IRA, or ROTH IRA plans would be exempt as would college savings and capital gains on most home sales.

It’s time to turn our upside-down tax code right-side up! Click here to send a message of support to the State Senate and urge your Senator to support SB 5961!

This bill won't just ask the wealthiest Washingtonians to pay their fair share in taxes, it will also help low- and moderate-income families in our state by creating a new tax credit. The Working Families Tax Credit, building off the federal Earned Income Tax Credit (EITC), would put dollars back into the pockets of working families. This new tax credit comes at a critical time as working families struggle with the rising cost of living in our our state.

The Working Families Tax Credit is a win-win for Washington. It is pro-work, pro-family, and one of the strongest tools we have in combating poverty. In fact, study after study has shown how state and federal earned income tax credits boost families and local economies. Researchers have also found links between the EITC and improvements in infant and maternal health, better school performance of elementary and middle-school students whose families receive larger refundable credits, and greater college enrollment among students whose parents received the EITC.[3]

We can win this if we work together to build support for a balanced tax code! Click here to send your State Senator a quick message, urging them to stand strong in support of SB 5961!

Take Action!
Washington Legislators: Families are rising for a cleaned up tax code