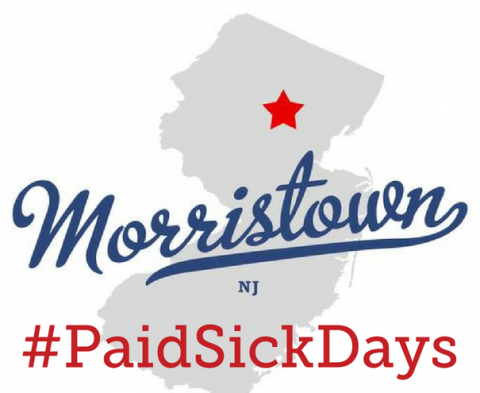 Sara Alcid
Share This
Add your voice to the comments
Are you ready for paid sick days in Morristown? I have some exciting news! The Town Council introduced a paid sick days ordinance on August 9th and they’re meeting again today, September 13th, to hear what you think about it!
Tell the Morristown Council: Please support paid sick days for Morristown’s working families!
No parent should have to choose between sending a sick child to school or staying home with them and losing a paycheck – or possibly even their job. Yet, nearly one in five low-wage working mothers have lost a job for this reason.
The truth is we ALL get sick, but not everyone in New Jersey has access to the time off they need to get better. Some 1.2 million New Jersey workers – that’s more than 1 in 3 – do not currently have the ability to earn paid sick days. For a family without paid sick days, just 3.5 days of missed work because of illness is the equivalent to an entire month of groceries for the average family.
That's bad for New Jersey families, and it's bad for New Jersey's economy, but Morristown has a chance to ensure that workers in our community won’t have to face this impossible dilemma.
Add your name → Urge the Morristown Council to support paid sick days!
The ordinance being considered by the Council would enable workers to earn three to five paid sick days each year. Morristown would be joining 11 other municipalities across New Jersey in guaranteeing paid sick days for all private sector workers.
Paid sick days keep people in the jobs they desperately need and even save employers money. When employers implement paid sick days, typically at little to no cost, they actually end up saving money because the cost of replacing an employee is around a fifth of their total salary. That's one of the many reasons why a whopping 83% of New Jersey residents support paid sick days!
TAKE ACTION: Ask the Morristown Council to do what’s best for working families and pass the paid sick days ordinance!
Together, we're a powerful force for women and families in New Jersey!
Take Action!
Take Action!