OMG! There's a CANCER-Causing Chemical in This?! 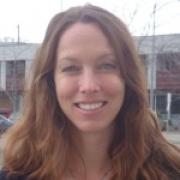 Tide: Take the cancer out! 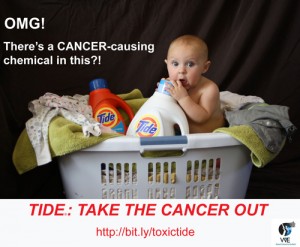 Baby Emma just found out Tide's toxic secret—and she’s shocked that her favorite detergents are contaminated with a cancer-causing chemical!

Women’s Voices for the Earth’s recent report, Dirty Secrets: What’s Hiding in Your Cleaning Products, revealed a secret cancer-causing chemical called 1,4-dioxane hiding out in both Tide and Tide Free & Gentle – which, appallingly, is marketed to moms as a healthier choice for their children’s laundry.

Emma's not going to sit back and take this. Together, we're blowing Tide's secret by spreading this image on Facebook revealing that Tide and Tide Free & Gentle contain a chemical known to cause cancer.

But she can’t make it go viral on social media on her own. Help Emma convince Tide to take the cancer out by posting her image on Tide’s Facebook wall and sharing it with your friends.

Tide and Tide Free & Gentle are two of the top-selling detergents in the country, which is why the company doesn’t want people to know they contain 1,4-dioxane, a chemical known to cause cancer.

You know what makes this even more appalling? (Aside from the fact that 1,4-dioxane doesn’t need to be in there, and that Tide knows how to take it out—they just won’t.) Tide Free & Gentle is marketed to unsuspecting moms as a “healthier choice” for their children’s laundry! If only those moms knew…

That’s why, even if you don’t use Tide, Emma needs your help. There are millions of people out there who have no idea that Tide is toxic, who are unknowingly washing their clothes in a product that contains a carcinogen. You can be the one to open their eyes to this toxic detergent by helping us spread this image.

1,4-dioxane is classified as a probable carcinogen by the Environmental Protection Agency (EPA) and a known carcinogen under Proposition 65 in California. 1,4-dioxane is sometimes found in products that create suds, like shampoo, liquid soap, and bubble bath. It is an expected contaminant when chemicals like sodium laureth sulfate, PEG compounds, and others are present.

We know that it’s possible to strip this harmful chemical out of products. Procter & Gamble (makers of Tide) reformulated its Herbal Essences shampoo in 2010 to strip out 1,4-dioxane. Tide Free & Gentle contains three times the amount of this cancer-causing chemical!

Johnson & Johnson, another massive consumer products company, announced in July that is stripping 1,4-dioxane from all of its products worldwide. There’s no reason that Procter & Gamble can’t do the same.

The Tide website says: "Safety: The Most Important Ingredient in Tide." If that’s true, 1,4-dioxane should never have been in the product in the first place.

We’re done being ignored by Tide. It’s time to turn up the volume, and it’s time to take it viral.

Help us reveal Tide’s secret and force them to remove this harmful chemical by spreading the word all over social media!

**Not on Facebook? You can still take action by sending a quick email telling Tide to take the cancer out.