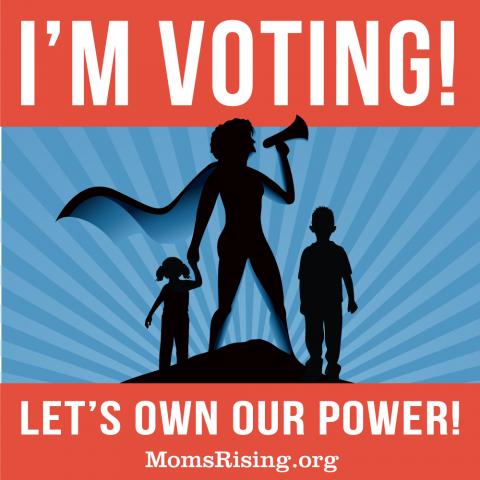 November 4th, Election Day, is your chance to make sure earned sick days AND raising the minimum wage win big in Oakland! It's not just election season. It's also the beginning of cold and flu season. This winter, over 56,000 workers in Oakland will not be able to earn paid sick days, no matter how hard they work or how sick they or their children are.

But you have the opportunity to change this and that's why you must get to the polls on November 4th and vote YES on Measure FF. Pledge to vote YES on Measure FF now!
Voting YES on Measure FF means voting for the 37% of private sector workers in Oakland, who currently do not have access to a single paid sick day, to finally have the right to earn sick days without risking losing their jobs or a day’s pay. The measure would require small businesses (those with fewer than ten employees) in Oakland to provide five days of earned sick leave to their employees beginning on March 2, 2015, accruing at a rate of one hour of paid sick leave for every 30 hours worked. Larger businesses with ten or more employees would be required to provide nine days of earned sick leave. This is a great thing because no one should have to choose between their health and their paycheck, and every worker should be able to earn time to care for themselves or their family when illness strikes.
If passed by voters like you, this ballot measure would also establish a minimum wage of $12.25 (with cost of living increases). As a result, between 40,000 - 48,000 Oakland workers would receive a much needed raise on March 1, 2015.
An overwhelming majority — 85% — of Californians polled support paid sick days, and over 70% of Oakland's voters support raising the minimum wage to $12.25.
But that doesn't mean we can take a victory for paid sick days and the minimum wage for granted. Turnout in this election is expected to be low, and on top of that, sometimes voters don't make it all the way down the ballot to where the Measure FF question will be. Make sure that this election, the TOP priority for Oakland voters is at the BOTTOM of the ballot!
We cannot take anything for granted. Stand with us — on the right side of history! Declare it now by pledging to vote YES on Measure FF.
Pledging to vote YES on this important ballot measure and encouraging your friends to do the same helps ensure we show up to the polls on November 4th. Voter turnout for midterm elections, like this year's, is historically low. But our vote is our voice and we have to make sure your voice is heard loud and clear on earned sick days and the miminum wage in Oakland.
With your vote — and your voice — hardworking Oakland families will be able to balance job obligations and family needs with access to paid sick days and a fairer wage. The great thing about Measure 77 is that it would boost the economic security and success of Oakland. Paid sick days laws keep people in the jobs they desperately need and even save employers money because offerieng paid sick days is much less expensive than the cost of replacing workers through advertising, not to mention the time it takes to interview and train new employees. [1] In fact, the national economy suffers when workers go to work sick, losing a whole $160 billion a year in lost productivity. YIKES!
After performing research on the likely impacts of raising the minimum wage to $12.25 in Oakland, Michael Reich, leading economist and Director of UC Berkeley's Institute for Research on Labor and Employment said: "A citywide minimum wage can help make the economy more equitable without harming economic growth. That's more money in low-wage workers' pockets for a healthier city and a healthier economy."
The case for earned sick days and a $12.25 minimum wage in Oakland is strong and clear, so don't forget to pledge to vote YES on Measure FF!
Say it with me now: #WEmatter, #WEvote and #WEarePowerful! Together, we are a strong force for women and families at the polls.

We are so grateful to our friends at the Alliance of Californians for Community Empowerment, Lift Up Oakland, and Next Generations for their tireless work on paid sick days and collaboration with MomsRising.