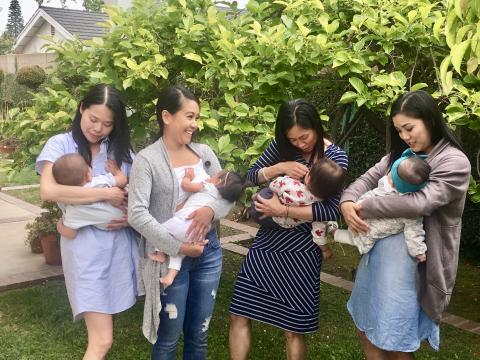 Normalizing Breastfeeding in Our Community

I have a story about persistence.

At that time, I just returned to work after a 3-month-long maternity leave to that particular newspaper as a staff writer. And yes, I was breastfeeding. I certainly felt shocked by that article and tried to talk to the company’s president. But he wiped my concern by saying “you’re overreacting.”

The article received strong reaction from our local Chinese-speaking community. Dozens of protesting letters from readers flew into the newsroom, yet the paper had no response.

The mother company of the newspaper is headquartered in Taiwan. The Breastfeeding Association of Taiwan launched a protest against the company and demand for an apology, but the company had no comment.

Three weeks later, I left the company over a breastfeeding discrimination lawsuit (which is another story.) I got together with several of my fellow believers and talked about that in response to discriminating speech like this, we should start a photo voice project and illustrate the beauty and importance of breastfeeding.

That project did not happen for lack of budget. Without money, it was hard to afford a professional photographer or a decent venue. Also, the Asian community is relatively conservative and it has been a challenge to recruit models.

Since that rude awakening, I have been dedicating my career to speaking up about breastfeeding barriers in our community. Five years later in 2018, I was selected as one of the leaders by HealthConnect One’s Birth Equity Leadership Academy. Through the Academy I was able to secure a funding that can finally make the photo project happen!

This week, in collaboration with Asian Breastfeeding Task Force of SoCal, BreastfeedLA, and PHFE WIC, the project was finally happening. With a small stipend we were able to recruit 20 mother-baby pairs to participate in this community based project. Also with a reasonable price we were able to hire great photographer and videographer. A team member and a friend generously opened her beautiful house for the photo shooting. I looked at the mothers and babies (and some fathers) post in front of the camera and have their breastfeeding photo taken. I watched the mothers (and some fathers) share their breastfeeding experience, good or bad, in on-camera interviews. I wanted to cry.

It’s been six years since the photo project idea first came to me. I wanted to shout to my previous employer, “Did you see that? Breastfeeding is not disturbing or disgusting. It’s beautiful and graceful!”

But of course they wouldn’t hear that. And the project is really not about them or about me anymore. It’s about the community. Without the efforts of the team, the project would never happen.

Southern California has the biggest population of Asians in the world outside of Asia, yet fewer than 4% of all lactation consultants in this area speaks an Asian language (BreastfeedLA, 2019). It’s our hope that the effort will increase breastfeeding rates in our community. And no one would ever again tell mothers “breastfeeding images are disturbing and disgusting. Your breastfeeding photos are embarrass our community to death.”

The photos and videos of Asian women breastfeeding will be up in a traveling photo gallery exhibit! Pleas stay tuned.