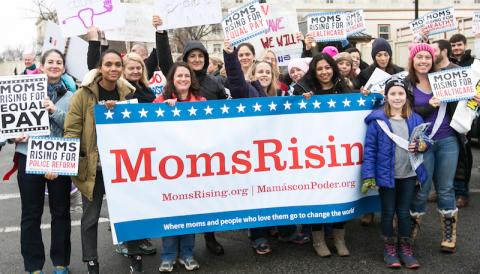 Moms On The Front Lines of the Resistance - 1st 100 days!

THANK YOU!  Through all the political chaos that’s happened since Trump took the White House we’ve been blown away by the impact at the state and federal levels of the over million members, and millions of readers, of MomsRising who have been raising their voices in high impact ways for the last ten years -- and with increased intensity since Trump took the Oval Office now almost 100 days ago.

We want to flag some of the big campaigns that MomsRising members have played a major role in advancing at the state and federal levels recently as we approach Trump’s first 100 Days  -- and also note how moms, in particular, across the nation have been fueling the resistance (By way of background: Studies are showing that women are the majority of the resistors who are volunteering their time and 82% of women have children by the time they are 44 years old in our nation. So moms are at the heart of the resistance).
*There’s a list of specific highlights from our recent wins below when you scroll down this post.
With over a million members, moms from MomsRising have been forceful advocates in a number of resistance victories in just the past few months.  From raising their voices directly to Congress on the importance of health care, alerting them to the nominations and White House staff positions that would hurt moms and families, raising the alarm on harmful immigration policy fighting to protect family and national economic security through the budget process and other key policies, and advancing key state policies, moms are taking action and having a big impact.
Specifically, moms have been cranking out tens of thousands (and tens and tens of thousands!) of calls to members of Congress on health care, sharing the stories of moms who are impacted by healthcare from every single state in the nation and in most Congressional districts directly with leaders, showing up in force at Town Hall meetings, turning out at state capitols, attending local meetings, sharing letters with Congressional representatives, meeting with members of Congress about the importance of protecting health care coverage, and so much more.
But MomsRising isn’t just having an impact at the federal level where many other organizations are also focused, MomsRising is also having a uniquely high impact at the state and local levels.  For instance, MomsRising members are also fueling major wins at the state level - from passing a pregnancy discrimination law in Washington State, to advancing paid family leave in DC, to protecting breastfeeding rights in New Mexico, to banning suspensions for K-2 in Maryland as a key tool for pushing back against policies that turn schools into prison pipelines, as well as passing sick days in Maryland too - MomsRising members are making change in their communities everyday.
Moms and MomsRising members have been on the frontlines of the resistance.
Additionally, MomsRising members also played an important role in organizing the Women’s March - with two MomsRising leaders helping to draft the movement’s Unity Principles, MomsRising’s ED speaking at the march in Washington, D.C., and doing massive outreach to our members and audience inviting them to attend.
Thank you for all you’ve done, and are doing, to make democracy work in the United States of America— and to build a nation where families and businesses can thrive!
HIGHLIGHTS OF SOME RECENT MOM & MOMSRISING WINS IN THE 1st 100 DAYS

Women’s March - MomsRising members took part in Women’s Marches across the country, countering Trump’s narrative of popular support and making women’s issues (including the issues of mothers and their families) a top priority for the resistance.  MomsRising members helped craft the Women’s March platform, and the March featured  MomsRising’s CEO and executive director, as a leading speaker.  MomsRising did interviews after the women’s march explaining the impact it had on moms, their families, and the fights ahead.
Washington State’s best-in-nation minimum wage and sick leave law take effect: In November, Washington state overwhelmingly passed I-1433, an initiative that will raise the statewide minimum wage to $13.50 an hour over four years and universalize earned sick days with most employees earning 7 days of sick leave each year. The state minimum wage raised to $11 an hour on January 1st and employees will start earning earned sick time in 2018.

- Puzder Withdraws from Nomination for Labor Secretary - After months of campaigning and public pressure from MomsRising members, fast-food CEO Andy Puzder withdrew his nomination for Labor Secretary.  Puzder faced backlash from MomsRising, which argued that Puzder was bad for workers, and for women and that he would work to undermine core labor policies that support family economic security.  Trump ultimately appointed a significantly more moderate Labor Secretary, saving families from economic disaster under Puzder.

- DC Passes Paid Leave Bill - MomsRising members worked hard for over 18 months to push forward and pass a legislation in DC expanding paid leave.  We held multiple on the ground events, and advocacy days, sent thousands of letters and made tons of calls to pressured Mayor Bowser to support the legislation, to which she ultimately did.

- Massachusetts Paid Family Leave Builds Momentum - With phone calls and emails, MomsRising members, in conjunction with coalition partners, helped to launch the introduction of the paid family leave legislation with record number co-sponsors.  The bill is set to be heard in June.

- Town Halls & In-District Meetings! - Making Our Voices Heard Across the Country - MomsRising members were on the front lines at February recess town halls and protests - demanding that Democrats and Republicans resist the Trump Administration and protect health care for more than 30 million Americans.  MomsRising members shared storybooks of families impacted by the Affordable Care Act and took place in more than 400 actions nationwide.  MomsRising is also part of the current Town Hall meetings across the country and our members are also holding a high level of in-district meetings, as well as doing materials drops to the offices of members of Congress right now.

- Federal Judge Blocks Trump’s Muslim Travel Ban - MomsRising members were outraged when President Trump signed an executive order limiting the immigrant of people from seven Muslim countries and suspending the Syrian refugee program.  MomsRising members turned up in force at protests across the country, signed on to open letters to Congress demanding that immigrant families be treated fairly, and praised the Court’s for doing their job and protecting the Constitution.

- Maryland Legislature Passes Paid Sick Days Legislation - After five years  of campaigning, including multiple on-the-ground events in Annapolis and across the state, thousands of messages and hundreds of calls, multiple events and stunts outside the State Capitol, the Maryland legislature finally passed the earned paid sick days bill which MomsRising called “a monumental step forward for working families in Maryland.”  MomsRising continues to work to ensure that the bill becomes law, urging Governor Hogan to sign the legislation.

- Maryland Passed Legislation Restricting Suspension and Expulsions of Kids Grade K-2 - MomsRising has been working on the issue of social and emotional development in children for the last few years, and was excited to see that Maryland started to listen to MomsRising advocates on the ground by passing legislation preventing children grades K-2 from being expelled or suspended from school, arguing that those methods of discipline were ineffective instead advocating for more reparative therapy programs.

- Town Halls & In-District Meetings! - MomsRising members show up in force at April Recess - MomsRising members not only attended Town Halls in force, sent questions to members of Congress to answer at Town Halls, they also organized over 2 dozen in-district meetings with their members of Congress during the April recess to talk about the importance of access to paid sick days, paid family leave and affordable childcare.

- Washington State passes the Healthy Starts Act & Moves Forward Paid Family/Medical Leave - After a year and a half of work, 2,000 MomsRising constituent contacts, countless testimonies, and more, the Washington State Legislature unanimously passed the Healthy Starts Act which extends reasonable accommodation to pregnant workers, makes important improvements to postpartum breastfeeding protocols for Medicaid patients, and establishes a new statewide legislative advisory committee on maternal and infant health. (In addition, paid family/medical leave bills were introduced by Democrats and Republicans in both the state House and Senate -- and advanced through multiple committees. A policy is expected to pass this year or next, making Washington the first state to pass this program that didn’t already have a temporary disability program. The state legislature is still in session).