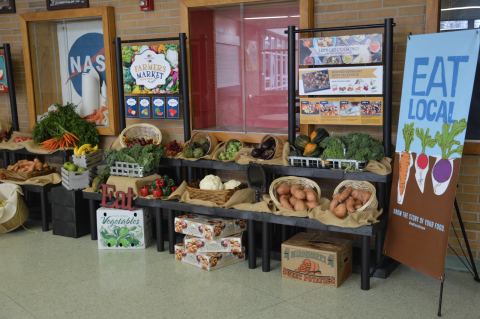 What a difference a dime makes.

In Michigan schools, children are eating fresh peaches for the first time after only tasting canned. The kids take a juicy bite, and their faces light up. Even apples—the iconic school fruit—are causing a sensation as children learn in school meals that different varieties can be sweet, tart, and in between. And Brussels sprouts? Yes, please. Roasted.

It’s all thanks to an innovative Michigan program that is cultivating healthy eating habits among children by introducing them to the wide variety of fruits and vegetables so necessary for good nutrition, and doing it in schools—the places where kids get up to two and even three meals a day.

And now the Michigan Legislature and Gov. Gretchen Whitmer have taken budget action for the new fiscal year to expand the program—called 10 Cents a Meal for Michigan’s Kids & Farms—so that it is available statewide for the first time. Despite a tight year for state finances due to the COVID-19 crisis, 10 Cents a Meal will be available to schools across the state, including for the first time in the rural Upper Peninsula and urban Detroit. The program’s budget was increased October 1 from $575,000 last year, in its fourth year in pilot regions, to $2 million now. Also new: early childhood education centers may tap into the matching grant funds, which are to purchase locally grown produce.

“Just letting our parents know what we are doing is huge,” a 10 Cents a Meal grant-winning food service director said in a report to the legislature a year ago. “We are in a district where half of students come from families that qualify for free and reduced lunch, so eating fresh and local is huge. A lot of people don’t have that opportunity at home.”

10 Cents a Meal is a matching grant program that, as it sounds, provides grant-winning school districts—and now also early childhood centers—with up to an extra dime per meal when they serve locally grown fruits, vegetables and dry beans. That might not sound like a lot, but schools typically have only $1 to $1.20 to spend on food for each school lunch, and of that, 20 to 30 cents is for produce. The program doubles the state’s investment because schools match the grant with existing school food dollars, usually federal—so federal dollars are directed into Michigan’s economy.

School food service directors say the extra dime gives them the flexibility to try new things. They’ve discovered local farms can provide greater variety than the products grown to withstand shipping cross-country. The local products include those differently flavored apples and multi-colored carrots that children love. Districts in the last legislative report cited 67 varieties of Michigan-grown fruits, vegetables and legumes that they tried for the first time.

“We found out kids were open to trying kohlrabi,” a food service director said. “I was very surprised by that!”

School staff say students also seem interested in trying foods when they learn they are grown by farmers nearby or at least in the state, said Diane Conners, senior policy specialist at Groundwork Center for Resilient Communities, a Voices for Healthy Kids grantee for advocacy around the 10 Cents a Meal program That meshes well with the state’s educational focus on “whole child” thinking, which includes reflecting children’s communities back to them.

It’s also proven to be a win-win-win approach, because the program not only helps schools and children, it also invests in Michigan’s diverse and important family farm economy. That brings multiple stakeholders to the table in support of the program. A recent sign-on letter encouraging the new expansion included more than 600 individuals and 200 organizations representing all 83 counties in the state.

Among those actively promoting 10 Cents a Meal are the Detroit Food Policy Council and the Crim Fitness Foundation in Flint, who are subgrantees with Groundwork Center on the Voices for Healthy Kids grant; and the Michigan Chapter of the American Academy of Pediatrics, which is implementing a different Voices for Healthy Kids grant. Farm organizations also support the program. And Sen. Wayne Schmidt, a Republican who is the key champion for the program in the legislature, said he’s seen so much bi-partisan support for the program that he almost considers it “nonpartisan.”

Those who have not had access to the grant until now are thrilled to see the expansion.

Kevin Frank, assistant food service director at Detroit Public Schools Community District, said he wants more fresh food for the children he serves and also wants to make an economic difference for Michigan growers, including smaller urban growers. He also wants to build more food security in the food supply chain. When COVID-19 hit, he saw that “the national supply chain is failing” with meat producers and vegetable processors having to shut down plants due to the virus.

“Too many of our families are undernourished and eat from a box or can,” she said. “We are working with communities across the state to eat traditional foods or foods grown locally, and 10 Cents a Meal is a program that we see supporting this effort.

“Fresh food connects people in the community to support each other and is a bridge across cultures,” Schulte added. “Childhood is sacred. When we invest our funding and efforts with the child at the center of our work, we will look into the future and reap the benefits across all sectors.”

Conners said the work is not done. Advocates’ goals for 10 Cents a Meal are to see it continue to expand in funding, and for people to be so aware of it across the state that it will be a beloved program.

“We want to see investing in healthy, locally grown food for children in schools and early childhood education centers become a part of Michigan’s identity,” she said. “Wouldn’t that be beautiful?”

Conners also hopes to see every child experience something that another 10 Cents a Meal food service director told her about. She was observing as her students tried peaches: “They were very intrigued with the peach fuzz. I actually saw kids rubbing them on their cheeks before eating them.”

Every child should be able to eat a fresh peach. And 10 Cents a Meal for Michigan’s Kids & Farms is helping to make that happen in the mitten state.