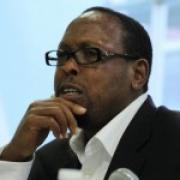 Mark Anthony Neal
Share This
Add your voice to the comments

When my wife and I adopted Misha Gabrielle, our oldest daughter was a two-week old infant in the late summer of 1998, the last thing we had thought about was my paternity leave. My wife was working at a relatively progressive college, and she was able to take eight weeks off before returning to work as an administrator. It had never occurred to me to ask for such a leave at my own institution—not nearly as progressive—and among a decidedly older generation of colleagues for which men asking for such leaves was unfathomable. As an academic though, I also knew that I had the kind of flexibility where I could be more of a hands-on parent than many of my professional and working-class male peers.

There was a kind of excitement when my wife returned to work. We made the decision that my daughter would only spend three days a week in childcare; on the two days a week that I didn’t teach, I’d stay home with her. Chalk up my excitement to being both a naïve new parent and a naïve new professor—somewhere in my mind, I had sketched out that I’d be able to be home those two days, spend time with my daughter, do some reading, get some writing done, and even make dinner. I had even prepared a playlist of songs that my daughter and I were going to listen to on that first day home together, adamant that my daughter would know those classic Motown melodies as naturally as she breathed.

I still have vivid memories of hearing the opening bars of Marvin Gaye and Tammi Terrell’s “Ain’t No Mountain High Enough”—and how quickly they were drowned out by the grumpy little girl, who complained for the next three hours, with me having little in my small repertoire of parenting skills to respond with. At wit’s end, the two of us finally went down for nap. By the next month, my daughter was on a regular five-day a week schedule at childcare.

The immediate lesson that I learned was that there was nothing fun or romantic about being stay-at-home parent—it’s a form of labor, that we continue to dismiss and undervalue as a society, so much so that even seemingly progressive men like myself, sometimes think it is something we can do effectively as a side hustle. The second lesson that I learned—and the one that has stayed with me for almost fifteen years—is that my work would always have to be scheduled around my parenting, and not the other way around. I also realize that this is a view of parenting that many folk don’t have the privilege of embracing.

The time that I spent with my daughter, especially until she was a toddler, taught me that parenting meant that children often dictated the flow and ebbs of our life, and not the other way around. Ironically, once I gave up the need to control my daughter’s time—and gave up the scheduling to her—I became a much more productive scholar. It was a simple reminder, that parenting is an organic process, and as a parent you have to be open to the unknown and the unscheduled. When we adopted my youngest daughter Camille four years later, I happened to be on sabbatical. I wrote a book that semester and notably spent more quality time with Camille in her first six months than I ever did with her older sister. Part of it was just that they were very different babies—Misha was always the more interactive of the two as an infant, though those roles have now switched in the tween and teen years. But I had also learned to give up the reins, as staying at home wasn’t nearly as literal as I originally thought: Camille would accompany me to the local coffee shops where I wrote or even into my office for meetings.

My daughters did indeed take to those classic Soul melodies like breathing. Camille counts the Diana Ross version of “Ain’t No Mountain High Enough” as one of her favorites, and even with her iPhone serving as a constant source of streaming content, I’ll glimpse Misha humming along to an Al Green song that’s on the car. These days some of the best parenting I do is of the mobile variety—listening to NPR in the car as I cart my daughters to school and various afterschool activities. My time still belongs to them, and that is how it should be. Years later, what I know is that the time that I’ve spent with my daughters—whether officially in a “stay-at-home” capacity or just a random appearance in school at lunch time—has been invaluable; those times have no doubt made me a better parent, but also a
better person—and a better man.

This post is part of the Fathers on Family Leave Blog Carnival.