Making Room for Everyone at the Health Reform Table

The reality is that as we come closer to the passage of health reform, many immigrants are going to be left out.

In the face of this situation, health reform and immigrant rights groups came together to do a big push to highlight the inequities and injustice of how immigrants are being treated.

Two weeks ago, the National Korean American Service & Education Consortium (NAKASEC) and affiliates initiated a petition campaign urging key policymakers to protect and include immigrants in health reform. At least 33 organizations across the country participated in this effort and in this two-week span, we collected 6,340 petitions.

The same organizations also organized a day of action in the East and West coasts on November 23.

On the West coast, legislative visits were held with staff of Senators Barbara Boxer and Diane Feinstein and Speaker Nancy Pelosi, followed by a rally and vigil in the afternoon organized in the heart of San Francisco, which enjoyed the participation of many local immigrant rights and Asian American and Pacific Islander community groups.

The nearly 250 community members recognized that the House bill afforded some protection to immigrant inclusion in health reform. They urged Speaker Pelosi, a key negotiator in the upcoming conference committee, to advance and fortify her position as a leader who fought against anti-immigrant amendments to pass the House bill, in the face of extreme pressure. The action also reminded the public that neither the House nor the Senate bills address the lifting of the five-year bar, which means that legal immigrants living and working in the extremest of poverty are made even more vulnerable. The “five-year bar” is a waiting period that prevents states from using federal funding in Medicaid for health services to legal immigrants who have had their legal status for less than five years.

“Hey hey, ho ho, the five year bar has got to go,” chanted college student leaders, children, elders and working parents in San Francisco, in a reflection of the strength of immigrant communities from across California. 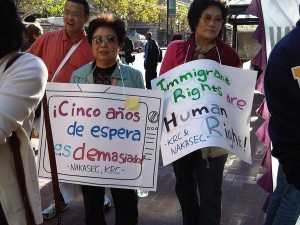 On the East coast in Washington, D.C. NAKASEC and CASA de Maryland organized a delegation of largely Latino and Asian American immigrants to the office of Rep. Joe Wilson to say it is not okay to prohibit people from seeking medical care based on immigration status, and that immigrants are part of this country.

"Si se puede!” and "Hal soo eet dah!" (“Yes we can!” in Spanish and Korean) chanted the group in solidarity. Unlike Rep. Wilson who is poisoning the health care debate and blocking the real progress that Americans need, immigrant communities want to be part of new and vibrant solutions to our nation's problems.

Korean Americans, Southeast Asian Americans, Chinese Americans, Latinos and others have decided that enough is not being done to change the landscape for health reform for all of America. This is an important step given where health reform is with the Senate. On Saturday, November 21, the Senate voted for cloture and is expected to begin debate with the Reid Substitute as the starting point on November 30. Among key differences between the House and Senate bill, the Senate bill notably prohibits undocumented immigrants from purchasing health insurance with their own money on the health exchange. See this article in the Christian Science Monitor for more details.

We urge you to monitor the debate and keep your eyes out for an action alert from NAKASEC to contact your policymakers, especially your Senators, to protect immigrant inclusion. We need legislators and the White House to do health reform the right way – by eliminating the federal five-year waiting period for legal immigrants in Medicaid and removing restrictions for undocumented immigrants to be able to purchase health insurance in the health exchange.

Check out our press statement, and links to more photos and video here from the November 23 day of action: http://nakasec.org/blog/1733.

This post was cross-posted at Asian Pacific Americans for Progress.