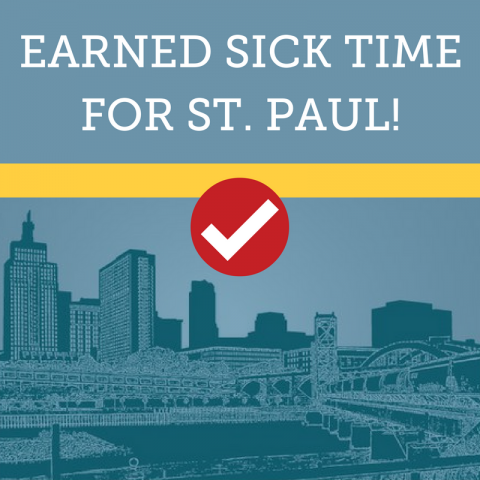 Sara Alcid
Share This
Add your voice to the comments
The St. Paul City Council is voting on earned sick time TODAY! This is our final chance to have an impact on the outcome of this important ordinance.
TAKE ACTION: Send a letter to the St. Paul City Council & ask them to PASS a strong and inclusive earned sick time ordinance!
When MomsRising members in St. Paul wrote to the City Council about earned sick time two weeks ago, it made a BIG splash! The Twin Cities' Pioneer Press even covered all of your inspiring action in an article titled, "Letters, Emails on St. Paul's Sick-Time Proposal Pour Into City Hall"!
Together, let's make sure to push the earned sick time ordinance over the finish line! Nobody should ever have to choose between a paycheck and the health of their family.
Urge the St. Paul City Council to pass earned sick time to boost families, businesses, and the economy!
This is so important. Why? Approximately 42% of workers in St. Paul, predominantly people of color and low-income workers, can't earn a single paid sick day to care for themselves or loved ones when illness strikes. What does this mean for St. Paul families? Well, for an average family without paid sick days, just 3.5 days of missed work is the equivalent to an entire month of groceries. Wow.
>>> Make your voice heard on earned sick time! Thank the St. Paul City Council for their hard work on this issue and ask them to pass a strong ordinance!
The earned sick time ordinance, crafted in large part by a city-led task force working with the Human Rights and Equal Economic Opportunity Department, calls for an hour of earned sick time for every 30 hours worked. St. Paul employees would be able to take paid time off to recover from an illness, care for a sick family member, and for survivors of intimate partner violence to seek counseling, medical care, and utilize the legal system.
For workers without earned sick time, a sick day can be disastrous. Nearly one in five low-wage working mothers have been fired for needing time off because they or their child is sick. Earned sick days boost job security and family economic security, which in turn strengthens the St. Paul economy. A win-win for all! It’s no surprise that small businesses are in favor of the ordinance.
Let's get the job done! Make sure the St. Paul City Council hears from YOU and passes earned sick time for hardworking families!
Together, we're a powerful force for women and families in Minnesota.
Take Action!
St. Paul –– Take Action!