Is the Polar Vortex Another Glimpse of Our Future? 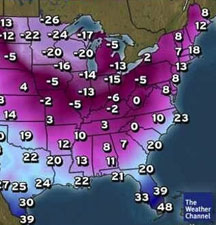 Already in these first days of 2014, my spirits are dampened by the vision of a frightening climate future coming at us at warp speed. Like in a science fiction story, Arctic winds have been swooping in from the far north, grabbing regions as far south as the bayous of Louisiana in an icicle grip, and plunging thermometers across the country far into the freezing zone. The phenomenon even has a sinister name, like what you might hear in a sci-fi movie: “POLAR VORTEX.” In some places, wind chills have dipped to 10… 20… 30… even 6o° F below, just like average temperatures on Mars.

This kind of cold is just not normal. It joins super hurricanes like Katrina and Sandy, monster heat waves, and prolonged droughts as just another example of weird weather – science fiction weather – arising from our rapidly changing climate. Such extreme weather events are only going to become more intense and frequent in the years to come, wreaking havoc on families and communities everywhere.

I worry about my kids and the children I hope they’ll have.

We need to stop this hurtling into a science fiction future. We need to try to put the brakes on climate change NOW, to at least slow things down if not reverse the forward momentum.

The climate is changing because of too much carbon dioxide (CO2) in the earth’s atmosphere, which acts as a blanket that traps heat and warms the planet, which can lead to periods of extreme cold. Power plants are responsible for close to 40 percent of carbon emissions in the United States, a huge proportion. Yet somehow, against all reason, we have never put limits on how much carbon pollution American power plants are allowed to spew, even though the carbon-scrubbing technology exists. It’s ridiculous.

But there is a first step in the works. The EPA just proposed limiting carbon emissions on all new power plants and for a brief time welcomes public comments about it. If the EPA receives an overwhelming number of supporting comments, the proposed rule is much more likely to move  forward. All Americans concerned about the planet’s future and what it holds for our kids(not to mention the public health risks from air pollution today) must support it!

There are powerful forces, however, that don't want climate change policies to advance. In the Senate alone, more than 30 lawmakers oppose finding solutions to climate change or, worse, don’t even believe that climate change is happening, despite consensus among 97% of climate scientists that it’s real. That’s why every voice demanding action on climate change is important. It’s only together that we can prevail over the pro-pollution lobby.

To slow down or divert our rocket-ship ride to a scary science fiction future that threatens us with devastating extreme weather events, we must start by tackling the huge amount of carbon pollution that power plants emit. Please sign MomsRising’s message to the EPA that moms and families want limits on carbon pollution now.

We will deliver the message and all supporting signatures to the EPA as part of the public comment process for the proposal rule to limit power plant carbon pollution. Every signature is considered a comment, and every comment counts!

Together, we can make 2014 the year for the United States to finally begin taking historic action on climate change.