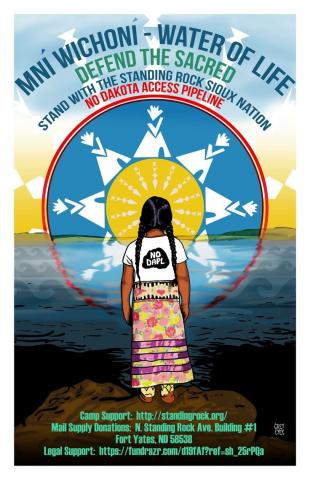 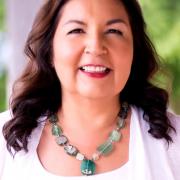 A group of young indigenous women were compelled to run for Mother Earth. In relays, the woman ran 2,000 miles from Standing Rock to Washington DC to bring petitions and the message that ‘Water is Life’ or ‘Mni Wiconi’.

They started in the cold of February, running across the fields, hills, and mountains of North Dakota and across the United States.

With their feet hitting the ground, they began a movement that, at its infancy, was called the Rezpect Our Water campaign. The Dakota Pipeline was to run next to Bismarck, North Dakota, but the citizens of Bismarck protested their concern about the safety of the pipeline, with its possible contamination of the water and potential to decrease the value of their properties. So, without proper consultation with the Sioux Nation, the pipeline was rerouted to within one-half mile of the indigenous reservation called Standing Rock.

BIRTH OF AN UPRISING

The women alerted people that there would be a 1,100-mile pipeline digging into Mother Earth, which would soon be ripping through our Native peoples’ burial sites and ceremonial/religious sites and harming the sacred water of the tributaries that eventually flow into the great Missouri River, supplying drinking water to more than eleven million people.

As the young women continued to run through the spring and into the summer, more people came to gather at Standing Rock.

Everyone was in prayer all the time. When actions were needed from us to go stand as Water Protectors in front of the corporation, state troopers, or National Guard, all the people knew they must do this in a prayerful way, so there was no alcohol and no weapons. Everyone was in sacred ceremony, speaking for the earth, chanting: “Water is Life, Mni Wiconi, Mni Wiconi.” The young women leaders and the Elders were clear that they were not protesters but water protectors: They were at Standing Rock, asking everyone to join with peace-filled hearts to protect the sacred water

The media messages continued to multiply, and as a result, four, five, six, seven, eight thousand began to gather in support, prayer, and ceremony with the Water Protectors. The UN sent in special observers along with Amnesty International to ensure that the peaceful Protectors of the Water’s human rights would not be violated by the growing presence of militarized police and private mercenaries. This campaign became a national and international movement, with supporters from South America, from the Amazon rain forests, from Europe, Asia, and the South Pacific—Maori and Aboriginal tribes. Next, U.S. military veterans, native and non-native, came in the thousands, saying they were there to protect the Water Protectors. A huge ceremony was held where the veterans apologized to Native Americans for what they had done to them in the past and asked forgiveness. The chants continued throughout the land: “Water is Life, Mni Wiconi, Mni Wiconi.”

On December 4, 2016, the secretary of the Army announced that the Dakota Pipeline would be rerouted. Celebration joined the fires and the prayers. Yet Water Protectors continue to steadfastly pursue the aims of Standing Rock, not knowing if, when, and where the decision will be honored, due to economic and political pressure.

What Standing Rock initiated is a powerful victory for indigenous people, who are choosing to stay on the spiritual path with their clear messages, for humans, plants, animals, fish, birds: To live we need clean water; water is sacred for us and for all future generations.

Non-native and native people felt the power of kindness, visible prayer, and the strength of unity on behalf of Mother Earth. Whether you were present at Standing Rock or watched on electronic screens around the world, we all felt that energy— we experienced our oneness.   Court battles continue to seek protection of the water, the sacred sites and the culture of the Standing Rock Sioux Tribe.  The Water Protectors are protecting the present and future for all of us.  Gratitude!