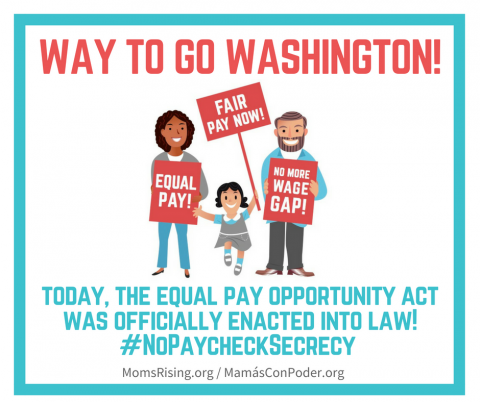 Washington! You did it! Today, the Equal Pay Opportunity Act became law!

This just-enacted-law means three big changes to your rights and protections in the workplace:

This is HUGE and in no small part thanks to MomsRising members like YOU! In fact, MomsRising members were critical to passing this legislation. Moms, dads, and families from across Washington sent over 1,750 emails to their lawmakers in support of the bill, made over 180 calls to their State Senators to urge final passage, and fought back against efforts to preempt local governments' ability to legislate future equal pay laws. Families also rallied at the Capitol with Governor Inslee and hand-delivered stories and petition signatures to key legislators. MomsRising staff members testified before the State House and Senate in support of the bill and were on-the-ground in Olympia to bring the stories and voices of MomsRising members straight into the policy process.