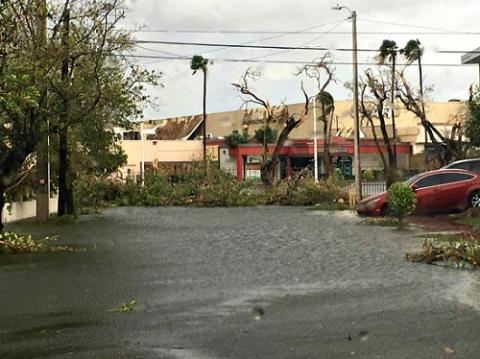 A National Public Radio story this week described a visit to Escuela Gaspar Vila Mayans, a public elementary school in the Rio Piedras neighborhood of San Juan, Puerto Rico: “‘PRESENTE!!!’ about 40 kids shout on cue — they’re the ones who are able to be present. More than three quarters of the student body isn’t here. Communications are spotty, so some may not be aware that this school has reopened. Principal Rita Barreto says many kids and their families are still dealing with the storm’s devastation, after losing ‘almost everything,’ she says, ‘the clothes, the furniture, the food.’ For some students, even their homes. The school is open during mornings now, as of last Wednesday, and it’s not clear when it will be back to full capacity. It has water, but no power. ‘This is a safe place,’ Barreto tells the students. ‘We are going to have breakfast, we are going to have lunch, we are going to have fun activities just so that you can have fun.’ The principal says some kids told her [their lunch of oatmeal and apple sauce] was their first full meal since the storm . . .”

Three weeks after Hurricane Maria ravaged the entire island of Puerto Rico, the children who have returned to school for a few hours a day in a building with no power are some of the lucky ones. Most of Puerto Rico’s 1,113 public schools have not reopened yet. Some are still being used as emergency shelters for families who lost their homes in the storm. Eighty-four percent of Puerto Rico remains without power and some areas may stay that way for at least six months. More than a million people still lack access to clean drinking water. Food, medicine, cash, and fuel are in short supply. Disease outbreaks have begun and medical emergencies are widespread but hospitals have not regained full power or capacity. The death toll continues to rise. In the very hardest hit rural areas some communities have not been able to make contact or receive any relief supplies or help at all.

Sick people, older people, and the very young are especially vulnerable right now. Current island conditions seem unfathomable but the sad reality is Puerto Rico’s children were some of the most at risk in America long before the storm. Nearly 6 in 10 of Puerto Rico’s children were poor in 2016 – more than 390,000 children. This child poverty rate was almost double that of New Mexico and Mississippi, the two states with the highest child poverty rates. Between 2011-2015, Puerto Rican child poverty exceeded 60 percent in 44 of the 78 towns and cities. More than 4 in 10 of Puerto Rico’s children under 6 lived in extreme child poverty at half the poverty line or lower, a rate more than four times our national average. In 2016, 38.9 percent of households in Puerto Rico received benefits through the Supplemental Nutrition Assistance Program (SNAP) – formerly food stamps – compared with 12.4 percent of all mainland U.S. households. About 1.7 million people were enrolled in Medicaid and CHIP in Puerto Rico in 2015, nearly half of the total population, but 20,000 children lacked any health insurance. More than three-quarters of Puerto Rico’s children who were eligible for Head Start were not enrolled in the program and nearly 100 percent of students in 4th and 8th grade performed below grade level in math!

Puerto Rico has struggled with a massive economic downturn since special exemptions that made it a tax haven for U.S. businesses, especially pharmaceutical companies, ended in 2006. The ongoing financial crisis led to an historic number of people migrating to the mainland in search of jobs and economic opportunity. The island’s overall population declined by more than 300,000 people between 2010-2016, including many students, doctors, and skilled workers. As young professionals fled the island they left behind an older and poorer population more dependent on social welfare programs although Puerto Rico now has a smaller tax base to support those programs. So many doctors leaving for the mainland led to such a shortage of doctors that some people had to wait more than a year to receive medical care. These were all preexisting conditions before Hurricane Maria made landfall pouring salt on the open wounds from the island’s financial turmoil and making everything much, much worse.

So how will we help Puerto Rican children and families recover and heal? To date some in our federal government have treated the island as if it were America’s stepchild and should be grateful for the crumbs received from the table of federal disaster relief. On October 8 President Trump tweeted, “Nobody could have done what I’ve done for #PuertoRico with so little appreciation. So much work!” And on October 12 he tweeted, “‘...We cannot keep FEMA, the Military & the First Responders, who have been amazing (under the most difficult circumstances) in P.R. forever!” But reports from the ground make clear the work President Trump believes he’s already done was delayed and is still nowhere close to being commensurate with the devastating level of suffering and need Puerto Rico’s 3.5 million citizens are experiencing. Many believe the federal government would have responded with more urgency to a natural disaster that left a mainland state without any power or tore asunder the lives of 3.5 million people in Texas or Florida.

Conditions in Puerto Rico are dire. Puerto Ricans are not our stepchildren – they are our brothers and sisters. We are not doing them a favor by helping; it is our obligation to aid our fellow Americans during their time of great need and tragedy beyond their control. With roads impassable, workplaces damaged, and jobs connected to tourism gone, so many Puerto Ricans have no idea when they will be able to go back to work or receive another paycheck and what will happen to their children. Some families able to get out made the quick decision to start all over again on the mainland. In the first week after the hurricane, Florida public schools reported enrolling 400 new children who had fled the storm and its aftermath. But children and families resettling in the mainland or staying behind to rebuild in the middle of massive destruction will all need our urgent help.

You, your family, friends, and colleagues can help in the following ways:
•Donate Money: Organizations such as UNICEF and United for Puerto Rico are accepting monetary donations for the island and at least 90 percent of donations goes to help Puerto Ricans affected by Hurricane Maria. Any amount helps.
•Donate Supplies: The island desperately needs supplies including bottled water, canned foods, blankets, diapers, baby formula, baby wipes and hand sanitizer. Here is a full list of needed materials. If you would like to provide any of these supplies, please visit: https://www.nvoad.org/howtohelp/donate/.
•Call Your Members of Congress: Without help from the federal government Puerto Rico will run out of money by October 31 and without a voting member in Congress the island is particularly disadvantaged in seeking federal aid. Congress is currently considering a bill to provide $36.5 billion in emergency funding for hurricane and wildfire relief and recovery helping victims in Texas, Florida, Puerto Rico, the U.S. Virgin Islands, and California, which many agree is needed but fear will not be nearly enough. Please call your Members of Congress at 877-233-9025 and urge them to pass hurricane relief for Puerto Rico now.

It is absolutely critical that we let children and families in Puerto Rico know that their country will not abandon them and will act with urgency and adequacy.