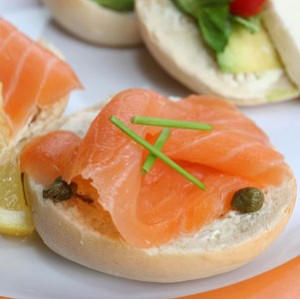 When is a salmon not a salmon? It sounds ridiculous, but that’s one of the most important issues in the food world, where the gloves are off in the fight about genetically engineered foods.

Genetically engineered or modified foods—known as GE foods or GMOs—have been unnaturally altered at the molecular level. The DNA from different sources or even different species are combined together to create a new set of genes that are thought to confer an advantage, such as more rapid growth or resistance to cold.

And, according to Healthy Child board member and food activist Robyn O’Brien, who appears in this video, some GE foods are designed to release insecticides inside the plant and to withstand increasing doses of pesticides. That’s right, insecticides and pesticides linked to cancer, neurotoxicity, birth defects, reproductive disorders, kidney and liver damage, according to Dr. Phil Landrigan of the Mount Sinai School of Medicine, who also serves on our Honorary Board.

Produced by the Just Label It coalition, of which Healthy Child Healthy World is a proud partner, the video reflects American’s growing concern about GE ingredients, which are in 80 percent of conventionally processed foods, according to the Washington Post, yet aren’t required to be labeled in the U.S.—unlike Russia, Brazil, Australia, China, Japan, and 15 countries in the European Union.

More than a half million people have signed the Just Label It petition to date—nearly three times more signatures than have ever been sent to the FDA on any topic. The labeling movement has so much traction that Gary Hirshberg, the visionary CEO of Stonyfield Farms, recently stepped down to focus on labeling advocacy work.

Oh, and about that salmon—which kicked off the hubbub in the first place. Makers of genetically modified salmon are currently seeking US FDA approval to sell their fish as salmon. If approved, the new salmon, dubbed “Frankenfish” by opponents, would become the first genetically engineered animal to enter the market.

And a fish might no longer be just a fish.