First on the Agenda for the New Congress: Fair Pay 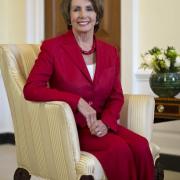 Leader Nancy Pelosi
Share This
Add your voice to the comments

In today’s economic crisis, women and families have been hit the hardest. Women struggling in this tough economy have had to make impossible decisions between health care for their children and paying rent or mortgages. But even in the best of times, women are still at disadvantage. After decades of struggle for equality, women still earn only 78 cents for every dollar earned by a man. It is long past time for this inequality to end.

The new Congress set to work immediately to do just that. After gaveling the 111th Congress into session on Tuesday, today the House passed two bills that will help ensure equal pay for equal work. Today’s passage of the Lilly Ledbetter Fair Pay Act and the Paycheck Fairness Act sends a strong message to women across the country: your work is valued.

When I accepted the Speaker’s gavel two years ago, women everywhere felt the marble ceiling had been shattered. Hillary Clinton’s historic campaign for the Presidency this year showed women everywhere that women are ready to lead our country.

But despite much progress, the struggle for equality in the workplace is far from over. More than 40 years after the passage of the Equal Pay Act and Title VI, women continue to be paid less for doing the same job as their male colleagues. This wage disparity costs women, and their families, anywhere from $400,000 to $2 million in lost wages over a lifetime. Lilly Ledbetter was paid less than her male counterparts at the Goodyear factory in Alabama where she worked for 19 years, simply because she is a woman. A jury sided with Ledbetter, but the Supreme Court overturned the verdict. The Lilly Ledbetter Fair Pay Act helps ensure all workers who have been discriminated against in the workplace get their day in court.

The second bill passed today, the Paycheck Fairness Act, helps women and families by strengthening the 1963 Equal Pay Act, ensuring that employers cannot avoid responsibility for discriminating on the basis of gender. As millions of American women struggle in today’s economy, equal pay for equal work is often about daily survival for families. Single women who are heads of their household are twice as likely to be in poverty as single men, and closing the wage gap will help women become more financially secure, especially in retirement.

For more than a decade, Congresswoman Rosa DeLauro of Connecticut fought to pass the Paycheck Fairness Act, but it took Democrats assuming control of Congress in 2006 for the bill to be given a hearing. Both of today’s bills were passed in the last Congress, but were blocked by Senate Republicans. Now, the Senate has a second opportunity and I urge you to contact your Senators to tell them how critical this legislation is to you.

Today’s bills are only the beginning of this exciting era of change. Next week, the House will take up key legislation to bring health insurance to more than 10 million American children, legislation that was vetoed twice by President Bush. Pay equity, fairness to women in the workplace, the Lilly Ledbetter Act, these are our priorities. This Congress has heard the message of change in the election. This Congress knows the needs of America’s women. This Congress has begun and will continue to act decisively on behalf of America’s working families.