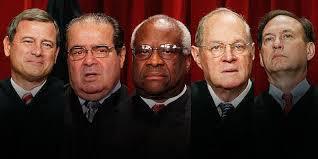 Faith above Facts: One Mom’s Career in Sex Law, Part 3

I’m ticked off with Supreme Court Justice Samuel Alito and four of his brethren. The nerve of those guys! In the recent, fiercely divided 5-4 Hobby Lobby decision, they ruled that one man’s belief is more important than a woman’s facts. Bosses now get to interfere with their female employees’ personal decisions about birth control.

Essentially, five men determined that discrimination against women isn’t discrimination at all.  They’ve all but condemned our daughters to decades of legal battles over access to basic birth control.

Adding insult to injury, they failed to even acknowledge a century’s worth of medical evidence that birth control is crucial to the health of women.  That is equivalent to spitting on our grandmothers’ graves.

And darn it, none of them took my pop quiz, either.  So yes, I’m ticked off. But I’m not the least bit surprised.  For me, reading the Hobby Lobby decision felt like déjà vu.

It brought back the moment, a few years ago, when I stood at the podium of a federal courtroom, representing a group of women who simply wanted their employer to cover birth control in the company health plan.

I had just begun introducing the undisputed science that, without birth control, the average woman would become pregnant about 12 to 15 times.  But as soon as those words crossed my lips, one judge snorted, cut me off, and smugly proclaimed, "All the women I know just love being pregnant."

Until that moment, I’d never, in 20 years of practicing law, heard a judge say something so prejudiced.

As one would guess, he ruled against us. Never mind the fact my clients’ employer covered every other prescription under the sun, including Viagra. Clearly, that judge knew what was best for women. We “just love” perpetually cycling between vomit, varicose veins, weight gain and labor pain, right ladies?

That judge seared into me, once and for all, that evidence is a dull blade to take into a knife fight for reproductive freedom.  For the next quarter century our nation’s highest courts will be dominated by men, like him, who are deeply biased against women’s autonomy.

And the far right is taking full advantage. The bosses of over 40 large companies, aside from Hobby Lobby, are now bringing federal lawsuits to deprive women of birth control.

Such an enormous investment in lawsuits defies all medical evidence, business judgment or common sense. If these bosses are truly acting out of faith-based opposition to abortion, why, pray tell, do they want to rob women of every method to prevent unwanted pregnancy?  They’re not exercising religion. They’re exercising phobia.

The good news is we can spare our daughters the endless legal battles ahead. Congress can right the wrong the Court is inflicting on women.

We must press our leaders to pass the Not My Boss' Business Act, which was introduced a few days ago by Senator Patty Murray.  If enacted, this measure would reverse the faith over fact Pandora’s Box that Hobby Lobby has opened, and ensure that employers cover all birth control methods, with zero co-pay.

Unlike the Justices, every member of Congress must face the voters this fall.  We have the power to vote them out of office if they fail to put our health needs first.