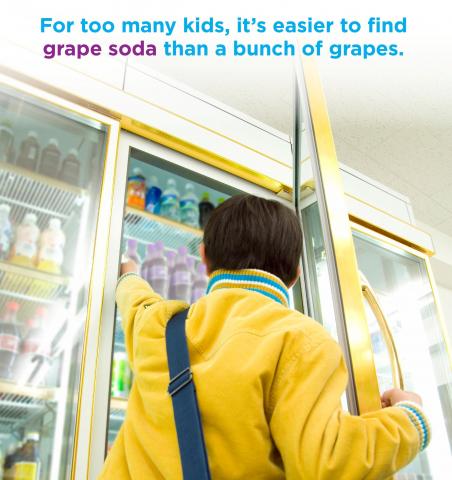 From Voices For Healthy Kids, a joint intiative of the American Heart Association and Robert Wood Johnson Foundation, working to make each day healthier for all children.

El Paso County, in West Texas, is investing in projects to improve access to healthy and affordable food for residents with low incomes. Through a new initiative, the county is actively working to improve food retail infrastructure and bring grocery stores, community markets and mobile food stands to areas of the county with high poverty, few living wage jobs and lack of healthy and affordable food. The effort follows approval by the County Commissioners Court, in December 2018, of $500,000 in initial grant funding for the nation’s first county-level Healthy Food Financing Initiative (HFFI).

An HFFI is a public-private partnership that encourages development and expansion of healthy food retail options and related infrastructure in underserved areas. The county partnered with The Paso del Norte Institute for Healthy Living at the University of El Paso Texas to develop the HFFI. The county’s financial commitment is being matched by another $500,000 in loans from PeopleFund, a Texas-based community development financial institution (CDFI).

“El Paso’s HFFI is very exciting,” said Christopher Roller, vice president of advocacy for the American Heart Association, which provides grants and technical assistance to healthy food advocacy campaigns across the country. “Besides this being the first county-level HFFI, it’s an excellent policy because it gets right to the heart of important issues in low-income communities. HFFIs help residents take better care of their health by increasing access to nutritious foods and fostering economic development and creating jobs. It’s a win-win-win for everyone.”

A Region in Need of Reliable Access to Healthy Food

El Paso, Texas conjures up a variety of images for people who don’t live there—a vast blue sky, flat land stretching out toward desert-colored mountains, a lively city with crowded Mexican restaurants, the Rio Grande River, and the bustling United States-Mexico border. For the nearly 900,000 people who live in the county, the reality is more complicated.

For one thing, residents there are constantly crossing borders—between towns, cities, counties, states and nations. That’s because El Paso County is part of the expansive Paso del Norte region, which encompasses the city of Las Cruces and the counties of Doña Ana and Otero in New Mexico as well as the city of Juárez, Mexico. Also known as the “Borderplex,” the broad, international metropolitan region is home to approximately 2.7 million people and is rich in history and the commingling of American and Mexican cultures and traditions. El Paso County spans over 1,000 square miles and encompasses urban, suburban and rural areas.

“The borders here are much more important to some politicians than to the rest of us who live here,” said Krysten Aguilar, co-executive director of La Semilla Food Center, a nonprofit dedicated to fostering a healthy, self-reliant, fair and sustainable regional food system in West Texas and Southern New Mexico. “It’s a huge, largely lower-income region with a discernible need for reliable access to fresh, nutritious food. El Paso County’s HFFI is an important policy action to help address that need. Hopefully, we can succeed with additional HFFIs in the region.”

According to a 2017 report, Food for Every Child: Access and Demand for Healthy Food in the Paso del Norte Region, jointly published by the IHL and The Food Trust with support from the Paso del Norte Health Foundation: “El Paso is one of the nation’s fastest-growing metropolitan areas, yet it has fewer supermarkets per capita than most major cities. This shortage of supermarkets means that residents, particularly those in lower-income neighborhoods and outlying areas, must travel long distances to purchase food or rely on mom-and-pop shops and convenience stores where fresh fruits and vegetables and other healthy, affordable food options are limited.”

The report found that, compared to national averages, there are 27 fewer supermarkets than needed in El Paso county and that its low-income neighborhoods and “colonias” are the most underserved. Further, 20% of the county’s population has limited supermarket access and one in four children live in homes where there is not enough money to consistently purchase healthy food. This is known as “food insecurity.”

In terms of health impacts, the report states: “[S]tudies show that residents of communities without a local grocery store suffer from disproportionately high rates of obesity, diabetes, and other diet-related health problems. In El Paso, 67% of residents are either overweight or obese.” The report also states: “. . . increasing access to nutritious, affordable food in communities with high rates of diet-related disease does not guarantee a reduction in the incidence of the disease. But if barriers to fresh food access can be removed, people in these communities can more easily maintain a healthy diet.”

El Paso County Steps Up to the Challenge

El Paso County Commissioner David Stout is focused on the connection between residents’ health and the health of the local economy.

Before he learned about HFFIs, Stout said he floated tax rebates as a way of incentivizing supermarket chains and grocery stores to open stores in parts of the county where not enough healthy food is available and/or inexpensive, unhealthy food is readily available.

“Grocers weren’t excited about the [county government’s chapter] 381 rebates because groceries and markets are low-margin businesses and start-up costs are extremely expensive,” Stout said. “Fortunately, with HFFIs, we saw a way to infuse food retail businesses with cash up front to help cover capital costs.”

Another local champion of El Paso’s HFFI was IHL Executive Director Leah Whigham, who worked with Commissioner Stout and others to engage county stakeholders in considering ways to improve the region’s health through better access to healthy foods and physical activity. In 2017, the IHL worked with The Food Trust, based in Philadelphia, to map healthy food access across the county as well as survey residents and engage stakeholders around food access needs. It also organized a food summit to release the results of its data collection efforts and host a discussion about ways to increase access to healthy, affordable food. The summit resulted in the Food for Every Child report, which prioritized development of an HFFI in the region.

“Healthy Food Financing Initiatives have worked well at state and city levels in other parts of the country. Our regional partners indicated strong support for a county-level HFFI and gave great input as to what that should look like,” said Whigham.

Stout and Whigham collaborated with Christopher Walker, community advocacy director for the AHA, who has extensive experience working with local and state governments on HFFIs and related policies that support the health of children and families. Walker was at the food summit and a frequent participant in early and on-going conversations with IHL and others. He said the conversations “turned into a full-fledged advocacy campaign” in early 2018.

“In 2018, I spent months in El Paso, connecting with people, rallying partners, helping commissioners and their staffs as well as the county’s economic development staff understand the value of an HFFI.” said Walker.

The combined efforts of these and other local champions paid off when the county commissioners approved the HFFI and published policy guidelines for use of the $500,000. In addition, PeopleFund CDFI agreed to offer another $500,000 in the form of low-interest loans to HFFI applicants. A second CDFI also has expressed interest in funding the HFFI,  but has not yet committed.

When asked about the success of El Paso County’s HFFI so far, Walker said: “It was the right place, right time and the right people came together and worked very, very hard to keep the momentum going. That’s what has to happen for a campaign to succeed.”

The Future is Bright

Commissioner Stout has talked to many of his constituents about the HFFI, explaining what it is and why it is important, and he plans to ramp up his constituent outreach efforts even further as the HFFI is implemented. He has heard residents discuss how difficult it is to find well-paying jobs that allow them to afford health care, food and transportation.

“They have told me stories about the daily challenges they face caring for their families,” Stout said. “They elected me to help find solutions, and I think the HFFI will help address their needs.”

“We were really impressed with the plans for the HFFI,” Clowe said. “It is very clear that this effort is not just about building supermarkets, but about exploring innovative ways to create access and improve health outcomes for our region.”

Clowe said Desert Spoon is exploring the idea of a micro grocery store, or pop-up fresh food market, that can be moved to various locations that lack healthy food access and serve as research and development for a larger-scale brick and mortar store.

“The micro store model,” she said, “has proven to be an innovative approach to addressing food insecurity by providing access to quality food in small, community-based stores with minimal investment needs.”

Clowe talked about the need to work with residents and empower them to make healthy food choices.

“We’ve seen families make an emotional connection to the food they eat,” she said. “Healthy food becomes a priority and an enjoyment for these families, which is everything we can hope for.”

As the focus in El Paso turns to implementation of the HFFI, IHL is working with the county to finalize roles and responsibilities, develop the application and evaluation processes, and meet with potential applicants, like Desert Spoon.

“The HFFI is an exciting opportunity for long-term impact on food access in El Paso County,” said Gabriela Gallegos, who leads IHL’s efforts to implement the HFFI. “It has strong support from the county economic development department, and IHL will be working with funding recipients to implement in-store programming and measure progress.”

The county’s economic development department expects to open the application process for HFFI grants and loans in summer 2019.

“Implementation is as important as the passage of a policy,” said AHA’s Roller. “There is still a lot of hard work to be done around this policy—encouraging additional financial commitments from more partners, ensuring that there is real uptake and that the money is awarded to projects that meet the healthy food needs in the county. And, beyond that, we hope to see more HFFIs passed in the region—both the need and the potential are certainly there.”

To learn more about this issue and how you can help mobilize a similar campaign, visit our Healthy Food Access toolkit. Within our toolkit, you will find helpful information to build out your own advocacy efforts aimed at developing policies that support increasing access to healthy, affordable foods in your community.