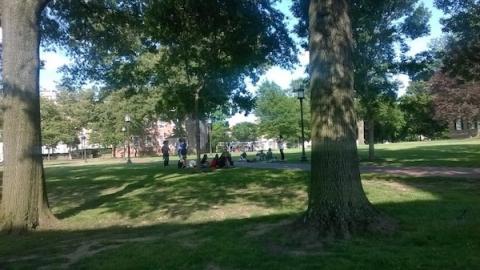 One of the many campuses we've looked at this year!

College is on my mind.

My oldest son has been preparing for his SATs these last couple months, and took the test (again) on Saturday. The next steps of applications and personal statements are all part of a busy year of preparation for young adulthood, which of course includes starting to make choices about his future career. So the realities of college, from the costs of tuition, room and board, books, and travel, to testing and application fees, not to mention the enormous amount of time my husband and I will dedicate to helping him navigate the higher education labyrinth, are never far from my thoughts.

Meanwhile, there are other college thoughts. The increasingly prevalent hook-up and rape cultures at college campuses, and the tragedy at UC Santa Barbara (now becoming an-almost-distant memory) are troubling examples of the intersection between life at our colleges and universities, our society’s views of both men and women, and how the genders relate to each other.

Though colleges and universities seem to continue to take an ivory tower arms-length approach to the “real world,” our campuses are clearly not immune to the problems in that world.

So it's not surprising that as parents, we begin to wonder why we are diligently supporting an education status quo that cannot keep our children safe. One also starts to wonder how these institutions are contributing to the world our children will navigate once they graduate.

I believe we need to look at the deeper ways colleges and universities impact our culture.

As the mother of two high school aged sons, I constantly question the true value of our family’s potential tuition investment. However, if I had daughters and knew that the rate of return would pencil out to as little as 70% of their male counterparts’ outlay, my faith in this rite of passage would decrease even more. On the one hand, young women must attain as much education as possible to increase their options for economic independence and security. On the other, no matter how successful they are academically, that education will likely not translate to the same level of career success that it would if they were men.

Even in cases where they reach the same professional level as men with the same degrees, the salaries women earn seldom equal those of male workers in the same jobs. When Microsoft CEO Satya Nadella stated that women should trust “karma” instead of asking for pay raises last week, he felt compelled to immediately apologize. However, his unrehearsed comment provided a clear illustration of what women are up against.

And institutions of higher learning need to acknowledge their part in this.

Discrimination against women is not restricted to the marketplace or the tech industry. Although women are outpacing men in college enrollment and graduation rates for bachelor’s degrees, master’s degrees, and PhDs, and they make up over 40% of the full-time faculty at higher education institutions, only 28% of full professors were female in 2009. And in 2010-2011, for full-time faculty, women earned 95.9% of men’s salaries at Associate Degree Institutions, 90.2% at Baccalaureate, 88.8% at Master’s, and 78.3% at Doctoral Institutions. In 2006, including all types of college institutions, 23% of college presidents were women, with the highest proportion at Associate Degree institutions (28%) and the lowest at Doctoral Degree institutions (13.8%).

If we look at colleges and universities as a kind of “education factory,” and if degrees are that factory’s products, women’s degrees make up the majority of what is produced by these factories. And yet, when these same factories utilize their own product (by hiring teachers or administrators with college degrees), they devalue more than half of that product. Sounds kind of like Microsoft.

And not only do these institutions overcharge for female degrees, and do an inadequate job of guaranteeing women's physical safety, they fail them when it comes to technology.

Even though women earned 63% of master’s degrees in 2010, and their medical, law, and business degree attainment has been about equal to men’s, there are significant gender gaps in STEM subjects.

The percentage of computer science degrees held by women has actually dropped significantly since 1986, when it was over 30%. Current figures range from about 13% to 18%, depending on the study. Though the percentage of females studying engineering continues to increase slowly, the high is now at 18% for bachelor’s degrees and fluctuates at around 22% and 23% for master’s degrees and PhDs -- considerably lower than other disciplines.

And there’s certainly the vicious circle aspect of things. Based on the plethora of brogramming articles and blog posts -- not to mention Nadella's gaffe -- being one of the few women persevering in tech is not likely to be particularly pleasant. And having an inkling of the challenges awaiting them may be one reason why women are not flocking to college computer science and engineering departments despite the enormous amount of effort being expended to encourage girls to study STEM subjects at the K through 12 levels.

At the same time, discriminatory institutional practices at colleges and universities (Title IX notwithstanding) contribute to a hostile environment for women -- as well as feelings of privilege and entitlement for men -- that cannot be separated from misogyny and sexual harassment on campuses and beyond.

In fairness, these are highly complicated issues, some of which require addressing extremely difficult social and cultural problems, including a consumer culture that relies on sexualized and exploitive marketing, entrenched economic inequities, and pervasive gender biases that affect both men and women.

Satya Nadella's remarks were degrading and sexist -- yet he was simply telling the truth about his industry. If we are going to bring about real change, we need to demand that all industries tell the truth -- starting with colleges and universities -- and then begin working towards substantive change. Considering the amount of money that each American family invests in education, I would hope that we might have a bit more market influence on this industry than we do with Microsoft.

I know there are a lot of parents recovering from this weekend's SATs. As we spend the coming year figuring out how we are going to afford this major purchase, perhaps we can also work together to use our market influence to ensure that our sons and daughters are part of creating a more equitable landscape both at school and after graduation.