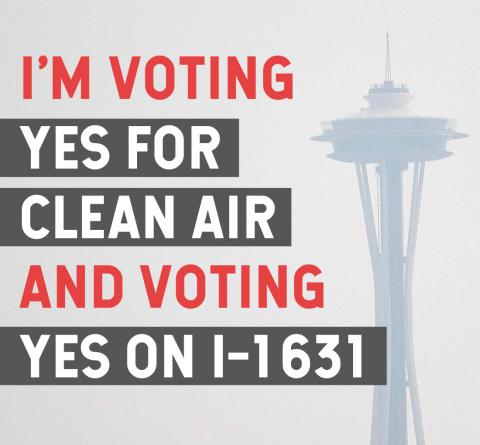 [Graphic with the Space Needle in smokey air, with text: I'm voting Yes for Clean Air and voting YES on I-1631]

Climate change is killing us

“The air is literally unsafe to breathe.  I've had a pounding headache for two weeks straight. My four year old has had a sore throat, constant cough, and and is wondering why he hasn't been able to play outside in a week. My one year old keeps sneezing and trying to play with the *three* new air filters in our house, blowing across the room to try to help clean the air for my family (and we are the lucky ones who were even able to find and afford air filters right now). And I have to ask myself: what is the long term effect on my kids and family?“

Take action now to build MOMentum for a clean air future by pledging to vote YES on I-1631 on the 2018 ballot.

In the Puget Sound region, we’re having the worst air quality ever recorded as a new weather phenomenon coined a “smoke storm” blankets Washington with clouds of smoke coming from from British Columbia so dense that they’ve been picked up on radar.  California is burning, so is Oregon, Idaho, Montana, Colorado, Washington, and the list goes on. Climate change is real, causing higher spring and summer temperatures and earlier snow melts, which in turn causes drier soil and a longer wildfire season.  And we need our leaders to DO SOMETHING. It’s now a 10-alarm emergency.

**We must do everything we can to stop climate change, and we can start by doing everything possible to pass Initiative 1631. Click here to pledge to join moms and dads across Washington and pledge to vote YES on I-1631!

I-1631 would put a fee on the state’s largest polluters, like the oil industry and utilities that have not switched over to clean energy, and invests in protecting our air and water and new clean energy infrastructure across the state. This initiative is a practical first step to ensure clean air and clean water for everyone in Washington and gives us the chance to pass on a healthier state to the next generation.

Click here to pledge to vote YES on I-1631 in November and share your pledge on social media to remind other Washington moms, dads, and family members to do the same!

The West is on fire, and we can all see it. Many people are having trouble breathing. Planes are delayed at airports due to low visibility.  We're getting alerts on our cell phones saying not to go outside. We’re also hearing from moms across the region who are at a loss for what to do - and sharing things like: “There is truly no worse feeling than having this major threat that you feel like you can do absolutely nothing to help protect your children from.”

Politicians like Trump have long insinuated that climate change is a hoax despite all the data to the contrary. Other leaders have swept the issue aside and delayed taking action, some in order to protect the profits of the fossil fuel industry and other polluters, but others just out of apathy because climate change hadn’t been seen yet in big ways. Well, nearly half of our nation is breathing it right now. And even so, at this very moment, unbelievably, the White House is dismantling the few flimsy rules we have in place to clean up emissions from coal fired power plants.

Climate change is killing us. But we can do something. We can stand up and fight for our lives and for our future by passing I-1631 in November. Click here to add pledge to vote YES on I-1631.

And we need to take the fight to the other Washington, too. It’s time for Congress to fight climate change with every tool at its disposal, including protecting clean power plants and so, so, so much more. Click here to send a message straight to Congress at this critical moment.

I'm not being dramatic: Alerts telling people the air is unhealthy to breathe and to avoid going outside (even in a car), to close your windows in your house, to use air filters, to wear masks, and that people with asthma and other conditions are particularly at risk have been coming out from the Puget Sound Clean Air Agency.

Nearly one in ten children in our nation have asthma (including me and my son too). You likely know people who are having trouble breathing right now. Pregnant women, young children, and those with other health conditions are all at increased risk.

This is it people. This is a wake up call.

***We need your quick signature now to get Congress moving on real change: https://action.momsrising.org/sign/climate_change_2018/?t=blog

For too long we've put off addressing climate change. As we’ve waited, much of our western continent is dealing with smoke and fire for the 2nd summer in a row with major smoke/wildfire issues. It's easy to look away, to give excuses and say things like, "Well, there's been bad forest management..." And sure that's true, and it's also an important issue that needs to be addressed, but many of the forests that are burning the most right now and bringing the majority of smoke to Washington State are far, far north to the of us in Canada in places where because it's now warmer there's been less snow, and thereby less snow melt, that would stop forests from igniting including in places like the Yukon territory.  That's not bad forest management. That's climate change. And it can’t be overlooked that much of the western continent is dealing with massive smoke and fire, not just the US. This is a global problem. This is an entire climate problem. This demands big changes.

I wish every single member of Congress was right here in Washington State this week having to stay inside in order to avoid the air outside, dealing with headaches and sore throats while keeping inhalers close despite the air filters in their house, and watching the smoke fill their neighborhoods for the second year in a row because then, maybe then, we'd have action. Since that's not likely to happen, this week, please join me in calling on Congress saying: "Enough already. Scientists say climate change is real. The West Coast can't breath. Stop playing political football with the health of future generations and move quickly to stop climate change."

And the more of us who reach out to our leaders, the bigger the impact we’ll have on this emergent priority for our country. So please pass the action link around, post it on social media, and be sure to sign onto our letter too.