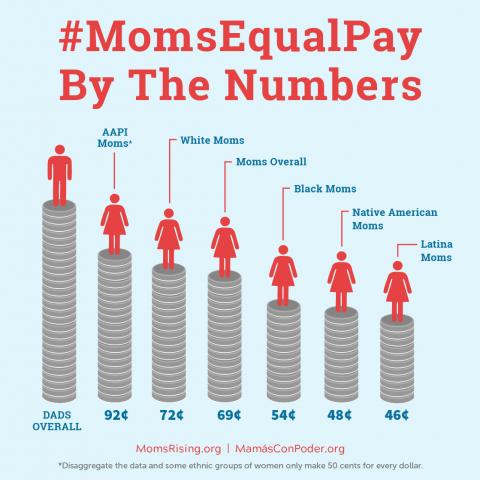 [Graphic of #MomsEqualPay by the Numbers]

Today, June 10th is NOT our favorite day. Not at all.

Why? Today is Moms’ Equal Pay Day, marking the fact that moms – across race and ethnicity – must work until June 10th of 2019 to earn what dads made in 2018 alone. Of course, averages alone don’t tell the whole story because, due to structural racism, moms of color face much larger wage gaps when compared separately. June 10th is also the 56th anniversary of the Equal Pay Act becoming law, yet we STILL don’t have pay equity.

>>> BUT there’s good news too: We know how to close the wage gap!

The Paycheck Fairness Act would help close loopholes in the Equal Pay Act and it was already PASSED by the U.S. House of Representatives this year. Now it’s the U.S. Senate’s turn to act!

The U.S. Senate cannot become a graveyard where good legislation goes to die – we need action on the Paycheck Fairness Act and we need it now. The Senate also needs to advance policies that would help alleviate the motherhood penalty, like earned sick days, paid family/medical leave, and affordable childcare!

Moms' Equal Pay Day is an important reminder that over 64% of moms are breadwinners or co-breadwinners; and that equal pay for moms is pivotal for lifting families out of poverty and boosting our national economy.

Equal pay is an LGBTQ issue too. Black and Latina LGBTQ women are more likely than their white counterparts to be raising children, but also more likely to be living in poverty. To lift all families, we need fair pay and we need it now.

The fact is that motherhood is a greater predictor of wage inequality than gender. In other words, the gender pay gap is largely due to motherhood – even if a woman ISN’T a mom, studies show the fact that she could potentially become a mom contributes to unequal pay.

***Please also take a moment to share this blog post with friends and family! Post the action link on Facebook and Twitter to spread the word. The more of us who take action, the better chance we have of making this the last #MomsEqualPay Day!