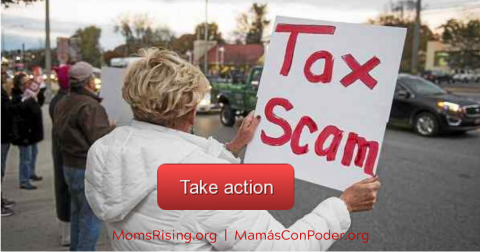 Send a letter to the editor calling on Congress to repeal the Trump Tax Scam! ---> https://action.momsrising.org/lte/TaxDay2019_LTE

Can you write a letter to speak out against the Trump Tax Scam?

The only people who are happy right now during tax season are the corporations and the top 1%, who received an average tax cut of $51,000 last year alone, who are getting a windfall from the Trump Tax Plan.

Tax Day is this coming Monday (April 15th) and we have one major message that we want to shout from the roof tops: The Trump Tax Scam is AWFUL and should be repealed!

***TAKE ACTION NOW! Send a letter to your local newspaper speaking out against the Tax Cuts and Jobs Act (aka Trump Tax Scam)! (Don’t worry—we make it super easy for you with our cool letter to the editor tool that will walk you through all the steps).

The Trump Tax Scam is still wildly unpopular, especially among women—only 30% of women in the U.S. approve of the law. And a majority of people say the law hasn’t improved their family's financial situation, like the Republicans promised when they passed the law on a partisan basis in December 2017. Instead, what most voters want is to make corporations and millionaires and billionaires pay their fair share! In fact, our partners at Tax March and Americans for Tax Fairness just released a poll that found that three out of four likely 2020 voters support raising taxes on the rich. This strong support extends across party lines, with 90% of Democrats, 70% of independents, and 60% of Republicans in favor of higher taxes for the rich.

We’ve been hearing from moms, dads, and angry people across the country who were expecting a tax return and instead owing thousands of dollars in taxes. Even if you are one of the families seeing a small increase in your tax refund, it’s temporary crumbs compared to the trillions (yes TRILLIONS) of dollars in permanent tax cuts the Trump-GOP Tax Scam has given away to mega-corporations! And what are those mega-corporations doing with their tax cuts? They certainly are not passing them onto their workers by creating higher wages or hiring more employees. Corporations are giving huge windfalls to their CEOS and wealthy shareholders in the form of stock buybacks instead. And who does the stock buybacks benefit? The wealthy of course— who have already seen a windfall in tax breaks from the Trump-GOP tax plan.

The Tax Cuts and Jobs Act doesn’t work for our families and it will continue to harm our economy. Instead, this Tax Day, we want to send a strong message that the tax scam should be repealed and instead we need tax policies, like improvements to the Earned Income Tax Credit (EITC) and Child Tax Credit, that boost our families, create a brighter future for our children, and keep our economy healthy.

We want to raise our voices on this important issue in a highly visible way by filling newspapers across the country with our message!

***Send a Letter to the Editor to your local paper now and call on Congress to repeal the Trump Tax Scam and instead pass tax policies that lift up working families!

We want to flood our local newspapers with Letters to the Editors NOW so next week when everyone is talking about Tax Day our message is heard loud and clear. The truth is the tax scam isn’t for me, for you, and for the vast majority of families in this country. It won’t create jobs. It hurts our economy. It hurts our families. And it has upside down morals by prioritizing millionaires, billionaires, and wealthy corporations rather than working families and growing kids.

It’s tax time and we are once again reminded that the Tax Cuts and Jobs Act (aka the Trump Tax Scam) has failed to bring true tax benefits to the vast majority of families in our community. That’s because mega-corporations and the 1 percent, who received an average tax cut of $51,000 last year alone, are experiencing a windfall from the TCJA. It’s not too late to do the right thing! This injustice must be remedied.

The TCJA is still wildly unpopular, especially among women—only 30% of women in the U.S. approve of the law. Instead, what most voters want is to make corporations and the top 1 percent pay their fair share! In fact, a recent poll found that three out of four likely 2020 voters support raising taxes on the rich.

Rather than continuing to give trillions of dollars away in tax cuts to mega-corporations, Congress should repeal this upside down, harmful law and instead concentrate its efforts on strengthening working family credits so our families can better care for their families and become more economically stable.

Expanding and strengthening the Earned Income Tax Credit (EITC) and the Child Tax Credit will go a long way to fixing our broken tax code and provide struggling families with the support they desperately need. Congress should pass improvements to these working family tax credits immediately. These are the types of tax policies our families need. Not trillions of dollars in tax giveaways to the already wealthy and mega-corporations.

***Can we count on you to submit a letter to the editor about the tax scam, in hopes that it will be published on or around Tax Day?

After you click the link to send your Letter to the Editor, please forward this email to friends—and also post the action link on Facebook. The more of us who send letters, the bigger the impact we’ll have on Tax Day.

P.S. On Tax Day (April 15th) we'll be holding a Twitterstorm with partners using hashtag #WhatsInYourReturn. Join us and tell us your thoughts about the Trump Tax Scam!

Take Action!
Send a letter to the editor calling on Congress to repeal the Trump Tax Scam!