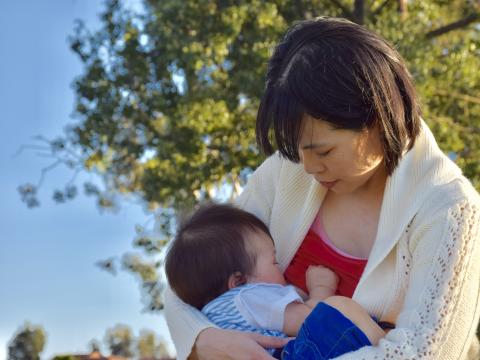 Breastfeeding is a human right

To-wen Tseng
Share This
Add your voice to the comments
December 10 is Human Rights Day. And right before the Human Rights Day this year, I received an e-mail from a mother, upset that her employer doesn’t support breastfeeding and that her supervisor told her “Not only breastfeeding moms are good moms, formula is as good.”
I was saddened. I am sad because I feel her. When I asked for breastfeeding accommodation from my previous employer, someone from the company told me, “You can just use formula. It’s as good. My son was formula-fed and he went to Harvard.”
I am sad because my hands are tied. I’ve been blogging about breastfeeding rights for more than three years and Wikipedia labeled me as a “breastfeeding activist,” yet my voice is small. The formula manufacturers spend $480 million each year marketing infant formula in the US. That’s more than six times the $68 million in total US federal government expenditures for breastfeeding support through the WIC Peer Counselor program and CDC initiatives.
Money talks. In spite of the government’s ongoing efforts on promoting breastfeeding, we hear more and more saying, “Infant formula is as good.” Earlier this year, singer Adele slammed celeb chef Jamie Oliver over breastfeeding comments. When Oliver said he would campaign to improve the breastfeeding rates in Britain, Adele said, “You can go fxxx yourself...(formula) Aptamil is just as good.”
A while ago, some infant formula company reached out and offered to pay me to write a “not only breastfeeding moms are good moms, infant formula is as good” post, which I refused. However there are numerous “influential bloggers” out there; I have no doubt the agent could easily find another blogger who is willing to write a few words and make several bucks.
I agree that not only breastfeeding moms are good moms, but I cannot pretend that infant formula is as good. Science has proven it’s not. Breastmilk contains antibodies that help babies fight off viruses and bacteria, which is not found in infant formula. Breastfeeding lowers baby’s risk of having asthma or allergies, which formula doesn’t.
Just last month, UN experts warned that the under-regulation marketing practices of infant formula industry still negatively affect the choices women around the world make about how to feed their children. And breastfeeding is a human rights issue for babies and mothers and should be protected and promoted for the benefit of both. Misleading, aggressive and inappropriate marketing of breastmilk substitutes is a violation of human rights.
The forceful promotion of products that compete with breastfeeding continues to undermine efforts to improve global breastfeeding rates, which have now been static for two decades, Independent reported.
The paper quoted UN report and pointed out, “Marketing practices often negatively affect the choices women make on how to feed their infants in the best way possible, and can impede both babies and mothers from enjoying the many health benefits of breastfeeding.”
I referred the mom who e-mailed me to her local breastfeeding support group. I wish I could do more than that. I certainly understand there will always be moms who can’t breastfeed—it’s a myth to think that the non-breastfeeding community is the silenced one; for years they have made known their difficulties. There’s nothing wrong with that. But it is very wrong to claim infant formula is as good and push mothers who actually can breastfeed to formula by forceful marketing and unsupportive culture.
This is a cross post from San Diego County Breastfeeding Coalition by To-wen Tseng.