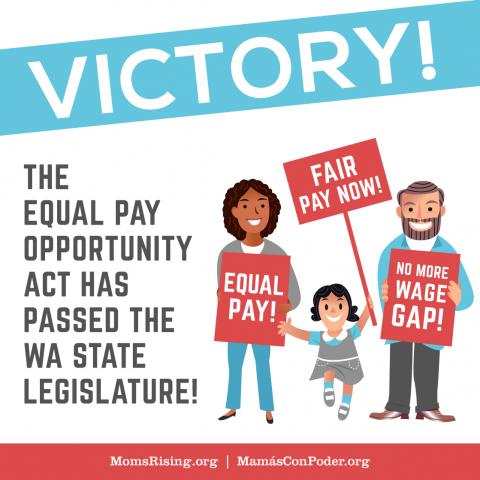 After years of hard work and advocacy, the Equal Pay Opportunity Act  has passed the Washington State Legislature. In a strong, bipartisan vote the State House and Senate sent a strong equal pay bill to Governor Inslee's desk and he is expected to sign it quickly into law.

Sign our thank you note to the legislators who stood with women and voted YES on the Equal Pay Opportunity Act!

$18 billion. That’s how much Washington women lose to the wage gap each year. Women of color lose the most. That’s the bad news.

The good news? The Equal Pay Opportunity Act -- which just passed the Washington State Legislature -- will do three HUGE things to help women fight wage discrimination in the workplace, including:

This is HUGE and in no small part thanks to MomsRising members like YOU! In fact, MomsRising members were critical to passing this legislation. Moms, dads, and families from across Washington sent over 1,750 emails to their lawmakers in support of the bill, made over 180 calls to their State Senators to urge final passage, and fought back against efforts to preempt local governments' ability to legislate future equal pay laws. Families also rallied at the Capitol with Governor Inslee and hand-delivered stories and petition signatures to key legislators. MomsRising staff members testified before the State House and Senate in support of the bill and were on-the-ground in Olympia to bring the stories and voices of MomsRising members straight into the policy process.

➜ This is a huge deal for Washington moms, women, and families. Can you help us say thank you by signing our thank you note for the legislators who voted yes?

Opponents of equal pay policies like the Equal Pay Opportunity Act often brush off the wage gap as a myth – or as something that only exists because of the choices women make about jobs. But that is simply not the case. Even when controlling for job type, education, hours worked, etc. economists consistently find that the gap cannot be fully explained away by anything other than discrimination. And that gap occurs across occupations.

The Equal Pay Opportunity Act won't end the wage gap, but it is an important step forward. In fact, this is the first update to our state's equal pay laws in nearly 75 years!

Can you help us end a MOMentous thank you to the State Representatives and Senators who voted YES on the Equal Pay Opportunity Act?

And also, after taking action, please make sure to forward this email to your friends and family so they can say thank you too!

When we all come together to raise our voices we can make real and meaningful progress. This proves that. Thank you for all that you do! Together, we are making a huge difference in the lives of women and families.