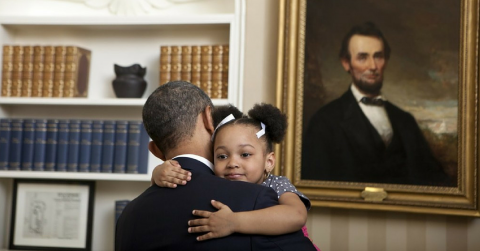 Back up President Obama's Executive Order on Paid Sick Days!

Whether it’s walking pneumonia or the flu, germs happen and kids and parents get sick. It’s just a fact. This is why allowing people to earn paid sick days as they work is pure common sense!

Join me in calling on the U.S. Department of Labor to move paid sick days forward for over 800,000 employees of federal contractors!

We’re so unbelievably close to making this happen. Last September, President Obama signed an Executive Order requiring companies that contract with the Federal Government to enable their employees to earn paid sick days. It means that over 400,000 working people who were previously unable to earn even a single paid sick day now won’t be forced to choose between going to work sick (or sending a sick child to school); or staying home and risking a day’s pay or possibly even risking their job. Overall, 800,000 workers will benefit.

This is great news, BUT we still have work to do to make sure it actually happens! The Department of Labor (DOL) has issued a proposed rule about how the Executive Order will work and the DOL is now taking public comments on the rule. In other words, they need to hear from YOU to keep this process moving forward!

Click here to urge the Department of Labor to move paid sick days forward ASAP!
This Executive Order will boost both families and our national economy. Here are the details: If advanced, employers in specified segments who contract with the Federal Government will start enabling their employees to earn up to seven days of paid sick leave annually – including for family care and absences resulting from domestic violence, sexual assault, and stalking. This Executive Order from President Obama will also provide the national movement for paid sick days with a big boost of even more momentum! It sends the message that paid sick days are a national priority – and working families sure know this to be true!
We also know that with access to earned sick days, everybody benefits: Our families, businesses and our economy.
That’s why we have to make sure the DOL finalizes what the President started by requiring federal contractors to enable employees to earn paid sick days. The comment period is coming to a close, so it’s important to add your name now!
Earned sick days are good for families and communities because they help working families stay healthy, keep their jobs, and continue providing for their families.
Earned sick days are a big win for businesses because they reduce turnover cost, boost workplace morale, and help stop the spread of illness among workers. When employers implement paid sick days, typically at little to no cost, they actually end up saving money because the cost of replacing an employee is around a fifth of their total salary.
Earned sick days are also good for our national economy because employees coming to work sick costs the national economy $160 billion annually because of lost productivity. It's no wonder so many businesses support paid sick days!
And it’s clear why momentum for earned sick days is growing across the country. In fact, earned sick days are now the law in California, Connecticut, Massachusetts, Oregon, and Vermont and nearly two dozen municipalities.
We need the DOL to implement the strongest possible rule requiring federal contractors to enable their employees to earn paid sick days. It’s good for our families, our communities, our businesses, and our economy!
YOU can help make sure this happens by taking a moment to sign onto our letter and adding your own comment about why earned paid sick days are so important.
Together, we're a powerful force for women and families.
Take Action!
Add your name → President Obama's plan for paid sick days