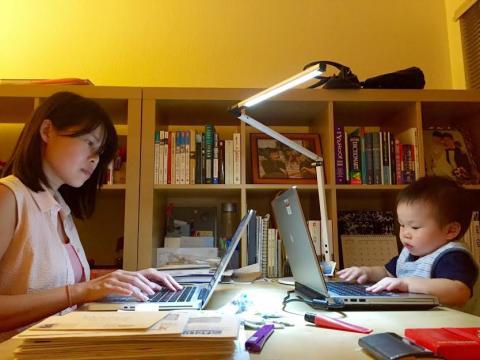 Are you one of the 56% American Mothers Who “Prefer” to Stay Home?

New data from Gallup suggests that 56% of moms would prefer to stay home with kids than work outside the home, and 39% of women without young children would like the role of a homemaker.

This is down from recent years. According to Gallup, in the late 1990s to early 2000s, more than half of women would have chosen to work outside the home, if given the chance. Soon after that, the numbers flipped back to what we see today.

The current numbers look like what one would expect from a society with members happy with the status quo, and may lead to the question: Who are groups like MomsRising even fighting for?

I am a work-from-home mother and it has been two years. The Gallup Poll had no option for work-at-home mothers. So if Gallup had called me and asked me if I would prefer to stay home or work outside the home, I would have to be one of the 56%.

I am not happy about this despite it’s a choice after careful thinking. In a perfect world, I would work full-time outside the home, bring the 50% of our household income, and play with the kids when I am home. But I am a stay-at-home mother. It is not because I don’t want to be in the workforce; it is because I can’t afford to be in the workforce.

I am not alone. Look at the Gallup numbers. That flip after 2000s is very important. It shows an idealism and desire that turned to action but got jinxed.

Considering the wage gap, the lack of pregnancy policies and paid family leave, the discrimination against women at the work place based on family reasons, the cost of childcare, for many moms, including me, leaving the home would cost more than staying.

At age 28, I was the U.S. based correspondent for the largest non-profit TV network in Chinese speaking world. At age 30, I moved into an anchor position for an Asian-language TV station serving Southern California and had my own TV news magazine. I thought I was going places.

But At age 33 I moved back home. The TV station entered bankruptcy in the economic crash and I moved to a newspaper which then refused to accommodate my lactation needs. I quit and sued the company for sexual discrimination. The suit was settled and I started to freelance from home.

Currently what I bring home is exactly the same as what it cost us in child care. I might be able to make a little bit more if work outside of the house, but thinking of the odd hours and unset schedule (which is the nature of working in the news industry), it is nearly impossible for me to go back to the work place. It is also nearly impossible for us to have a second child for the child care would cost us twice as what I bring home, forcing me to stop freelancing and become a real, full-time mother.

The only way for me to have a child and also a career is to work from home and have only one child. So here I stay.

My kid is now 2 years old. I still hope, in spite of all the difficulties and frustrations at this moment, I still hope to get a job outside the home one day, maybe when he goes to elementary school. That’s why I write for MomsRising.

Are you one of the 56% American mothers who “prefer” to stay home? Please join me and act today.

Give Affordable Early Education Some Momentum