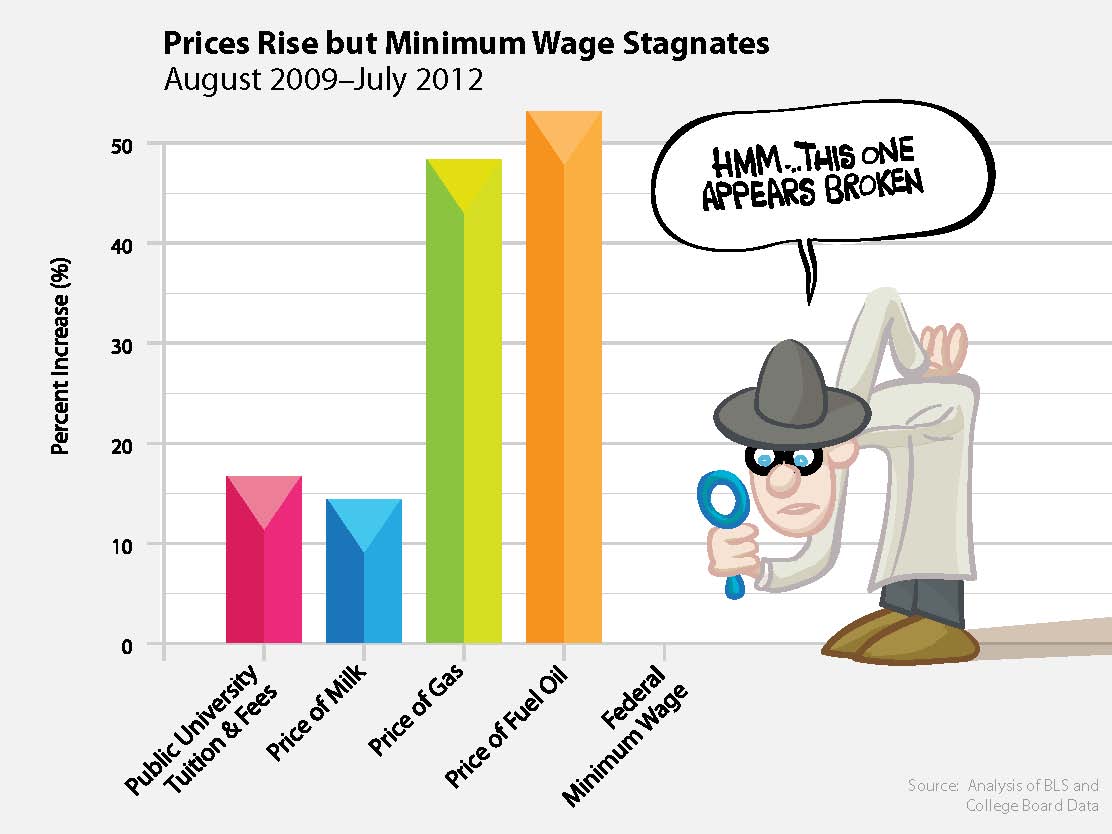 Did you hear the news? We scored BIG last week!

That's incredible momentum. But, we need even more sponsors to win!

We still need you! Tell your U.S. Representative to sponsor the bill and encourage her/his colleagues to sponsor as well!

Why is this important for women and families? Millions of workers – mostly women – struggle to make ends meet on the current minimum wage. At just $7.25 an hour, or roughly $15,080 per year, the current federal minimum wage hasn't been raised in THREE YEARS and is leaving working families in poverty. Last week on "MomsRising Radio with Kristin Rowe-Finkbeiner," we heard all about it from experts and leaders. (A link to listen to the podcast is below in the PS.). We also heard from moms like Margaret Lewis, a passenger transporter from Chicago who often works more than 65-70 hours per week.

The Fair Minimum Wage Act of 2012 would help moms like Margaret and their families by gradually raising the federal minimum wage from $7.25 to $9.80 per hour, increase the tipped minimum cash wage from $2.13 per hour to 70 percent of the minimum wage, and index the minimum wage to keep pace with inflation.

Raising the minimum wage isn't just good for women and families, it's good for our economy.  You see, putting more money into the pockets of consumers would give a much-needed boost to our economy.  What businesses in this country need right now are customers, but too many people aren’t making enough money to get by. So, consumer spending is down.  If we reduce income inequality, then we will boost our economy, help small businesses grow, and create jobs.

*Tell your Representative: Co-sponsor the Fair Minimum Wage Act of 2012 to raise the minimum wage and boost the economy.

People who work hard should be able to make a living wage, but too often that's not possible at the current federal minimum wage of $7.25 an hour.

We are gaining momentum thanks to the hundreds of thousands of people who petitioned their senators to support Senator Tom Harkin's Rebuild America Act (Senate Bill 2252), which would raise the federal minimum wage.  Now, Representative George Miller just introduced parallel legislation on the House side that increases the minimum wage from $7.25 to $9.80 by 2014, then indexes it to inflation thereafter. He has asked his colleagues in the House to co-sponsor the Fair Minimum Wage Act of 2012.

The Fair Minimum Wage Act of 2012 is significant for a number of reasons. It will index the minimum wage so that it automatically increases every year, giving workers a raise they can count on without having to wait for Congress to act. At a time when corporate profit margins in the U.S. economy are at an all-time high, employees' wages as a percent of the economy have hit an all-time low.[2]

When families get a boost, the economy does too! According to a recent study, disproportionate numbers of new jobs created in the current economic climate are jobs that pay by the hour, and many of the fastest growing types of jobs pay well below $10 per hour. [3] With the economy still struggling, Congress needs to use every tool available to ensure the quality of new jobs created, so that we have a meaningful recovery — and nothing will have greater impact than increasing the minimum wage for all workers.

Together, we are a strong force for women and families.

PS: Last week on "MomsRising Radio with Kristin Rowe-Finkbeiner," our partners at ROC - United, NWLC and SEIU joined a lively conversation that also included moms trying raise their children on low wages. Hear them talk about that fact that while CEO pay has sky-rocketed by 725 percent over the last 30 years, the minimum wage at $7.25 per hour hasn't kept up with inflation.