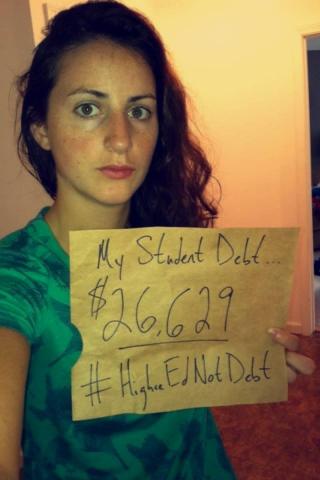 Well, they did it again.

Senate Republican leaders last week blocked Sen. Elizabeth Warren’s (D-Mass.) bill that would let students refinance their college loans. It’s not the first time. They also did it in June.

Don’t they understand that student loan debt is an emergency? It totals $1.2 trillion—and yes, that’s with a “T.” Sen. Warren’s bill would help 25 million student loan borrowers, saving them each an average of $2,000.

It would help them, if not for the Republican leaders’ refusal to allow a vote on the bill. Once again, the Republicans are choosing to protect their millionaire and billionaire friends—you see, Warren’s bill would be paid for by implementing the “Buffett Rule,” which would close tax loopholes for the super-wealthy.

Student loan debt is destroying lives and futures, saddling the average student borrower with about a $30,000 debt. Combine heavy debt with the tight job market and lousy pay students are graduating into and it’s devastating. The soaring costs of college and shrinking share of government aid also are discouraging young people—especially low-income young people—from going to college altogether. How unfair that is, while the constant, pounding message to poor people is to pull themselves up by their bootstraps and get an education if they want to land a well-paying job.

And it gets worse. Thanks to artificially high interest rates, our government actually profits hugely from student loans, pulling in way more than the costs. Lower interest rates would make repaying loans easier, but those profits are used as revenue the government could otherwise get by closing corporate tax loopholes.

Beyond the harm to student borrowers’ lives, the student debt crisis is dragging on our whole economy. Burdened with debt, young people can’t even think about taking the next steps into adulthood—moving out of their parents’ homes, getting a car, buying a house, saving for retirement, starting a business and just purchasing the goods that keep our consumer economy afloat.

Whether you’re a taxpayer, in school yourself, a grad or worried about your children, this is an issue worth caring about.

But the fate of Warren’s bill shouldn’t be a surprise. It’s not unique. Senate Republicans also recently blocked the Paycheck Fairness Act. For the third time. I guess these are the kind of votes affecting working people that Senate Minority Leader Mitch McConnell calls political “show votes.”

Shutting down student loan debt relief and denying equal pay? That’s just flat wrong, no matter what party you’re in. Issues like these are too important to draw a red or blue line through—but the young people I talk with throughout the country are keeping score. Will this issue mobilize the youth vote in 2014? Will it be the vehicle they use to register their anger and make change? I hope so!