Working to Keep Immigrant Families Together 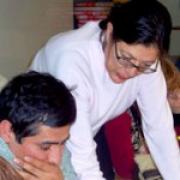 Amalia Guzman Molina
Share This
Add your voice to the comments

I know firsthand the struggle and heartbreak immigrant families experience when loved ones are incarcerated. My experience in a U.S. immigration jail led me to dedicate my life to advocating on behalf of this often marginalized community. And while it’s no secret that the U.S. has both the highest number of people in prison and the highest rate of arrests in the world, very little attention is paid to the high number of children who end up alone as a result—and even less to the children of incarcerated immigrants. Without parental guidance and emotional support, children with imprisoned parents struggle to survive on their own and face heightened risks of poverty, gang involvement, substance abuse and school delinquency. These are real threats for any child whose parent is in custody, whether they are incarcerated within the criminal justice system or are detained because of an immigration violation.

Like many immigrant families in the U.S., mine was broken apart as a result of current immigration law. In my home country of El Salvador, my family and I faced ongoing persecution by local guerrilla forces. My husband was an architect working with the U.S. Agency for International Development (USAID) to rebuild the hospitals and schools that the guerrillas had destroyed during the war. He had become a target and it was clear that our family was no longer safe. I did not want to leave El Salvador, but my husband was insistent that we move to the U.S., as it was the only way to protect our children.

After arriving in the U.S. on a visitor’s visa, we met with immigration lawyers to legalize our status. But we soon found out that even though we endured years of persecution by the guerrillas, because the war had ended, we were not eligible to apply for asylum. Our lawyers then recommended that we apply for citizenship through my husband’s sister, a U.S. citizen living in Miami.

While we were waiting for our status to be approved by U.S. immigration authorities, our visitor’s visa expired. Soon afterwards, my husband and I were reported to U.S. immigration authorities by former enemies in El Salvador and arrested. We were then detained by the Immigration and Naturalization Service (INS) [now Immigration and Customs Enforcement (ICE)] for 16 months in the San Pedro detention center in California. During this time, our three children—who were then 13, 16 and 19—were forced to survive on their own. My children had to live alone and in fear that the bank might repossess our house, that neighbors might report them to the authorities or that they might not piece together enough money to eat. From the dark confines of my cell I was always afraid for my children.

From the detention center, we worked with lawyers to apply for asylum. We lost. I felt hopeless. But finally, after 16 long months of not seeing my husband or holding my children, my husband and I were released. After our release, we appealed our case to the Board of Immigration Appeals, which ultimately granted us asylum.

It wasn’t long, however, before we were to experience yet another tragedy in our family. While in detention, my husband had become very ill and was never treated. We did not know what was wrong until we were released and met with doctors who diagnosed him. My husband died from lung cancer six months after we were granted asylum.

When I left detention, I knew that I had to dedicate my life to protecting the many mothers and children who suffer from separation as a result of current immigration law. Not long after our release from San Pedro, I foundedFamilies of the Incarcerated with the Office of Restorative Justice in Los Angeles. I now work with immigrant families whose family members are incarcerated, encouraging them to take ownership of their future instead of being a victim to circumstances. Parents who are going to be deported must be educated and empowered to make plans for their children. They must know their parental rights and decide what is best for their family, including whether or not they should take their children, leave them with other family members or with the foster care system. Families of the Incarcerated provides services to support these communities, including mentoring classes for children of inmates, classes for parents and caregivers on addressing destructive behaviors in adolescents and educational workshops on criminal and immigration law.

Although my family has experienced great tragedy, I know that we are very fortunate to be where we are today. I am committed to bringing these families the same chance for hope and opportunity that I had so that their own children are not lost to the cycle of violence and incarceration which is so common in their communities.