What a week!  The "binders full of women" quote exploded in a wide ranging national conversation.  It appeared everywhere from Facebook images going viral to people writing hilarious reviews of binders on Amazon.

But while pundits analyze the "binders" issue, we at MomsRising have some additional women's economic security policy questions that must be addressed.

You see, after the second presidential debate we know where candidate Mitt Romney stands on women, "binders," and home-cooked meals, but we don't know where he stands on key women's economic security policies like access to earned sick days, paid family and medical leave, and the Paycheck Fairness Act.

*Sign on here to our open letter to the Romney campaign asking him:  Where do you stand? 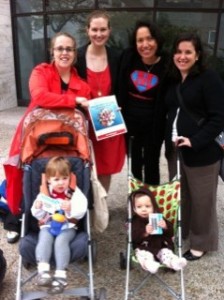 WASHINGTON, DC- MomsRising members and kids deliver books of our stories on fair pay to Members of Congress. Click here to take action asking the Romney campaign where the candidate stands!

Why ask about these policies now?  While getting home in time to cook dinner is an important thing for both men and women to do, it isn't the most critical issue facing our families.  Overall our family economic security policies are stuck in the past.  We need a serious discussion addressing them for our own pocketbooks and for our national economy.

Right now, nearly 80% of low wage workers and 40% of private sector workers don't have access to a single earned sick day for themselves or to care for a child--even though everyone gets sick.  And right now, the U.S. doesn't have a national paid family and medical leave program--even though over 170 other countries have such a policy for new moms.  Papua New Guinea and Swaziland join us in the dubious distinction of being some of the only nations in the world to not have paid leave for new moms.

The failure to deal with these policies is costing us dearly. According to the U.S Census, more than 80% of women in our nation become mothers and having a baby is a leading cause of "poverty spells."  Three-quarters of moms are in the labor force, and half of them are the primary breadwinners for their families.

Yet there's still rampant wage discrimination with women on average making only 77 cents to a man's dollar for full-time work, and mothers and women of color are most impacted.

We've got some real questions. The "binders full of women" issue came about because when the candidates were asked about equal pay for equal work, Mitt Romney talked instead about appointing women to office and about offering flexible work options to his chief of staff so she could be "home for making dinner," but he never did directly answer the question about if he supports equal pay for equal work. And we still want to know: Where does he stand?

We need to know this because unequal pay for equal work is simply unfair, and also because when women don't have adequate funds in their pockets, our entire economy -- which for better or worse is now built on consumer spending-- suffers.

Women's economic issues are key issues not only for women, but for our economy and for our nation as a whole. Women are projected to create more than half of the 9.72 million expected new small business jobs by 2018.  Women make three-quarters of the purchasing decisions for households.

Moms and women want--and need--candidates that openly and fully focus on the economic issues we face each day. Public opinion research bears that out. A poll conducted by Anzalone Liszt Research found that more than half of women voters (including 75% of Hispanic women, 80% of African American women, and 65% of women under 50) say they are more likely to support an elected official who supports paid sick days, a critical family economic security policy.

It's time to ask Romney, who hasn't yet stated his position, where he stands on key women's economic security policies like access to earned sick days, paid family and medical leave, and the Paycheck Fairness Act.

*Sign on here to our open letter to the Romney campaign asking him:  Where do you stand?

Please also take a moment to forward this email to friends so they can sign on too--and also copy and paste the action link into your Facebook page!

The more of us that ask these questions, and that sign on, the better the chance we'll get our answers!  And these answers are key to educating us all about our choices when we vote on November 6th.

Thank you for ALL you do for women, for moms, for children, for families, and for our nation!

PS. Many state election voter registration deadlines are right around the corner so take a moment right now to make sure you are registered to vote!