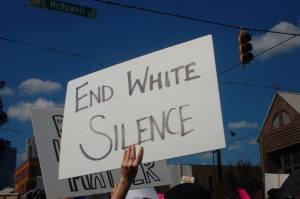 Why White Parents Need to Talk About Race

Stephanie Lormand
Share This
Add your voice to the comments
Thursday, I took my children to school and came home to cook my breakfast, to drink a reheated cup of coffee, to write in the silent safety of my home. I spent Wednesday on keyboard advocacy and deliberately teaching my kids about race. I’m white, my sons, 9 and 7, are also white. This wasn’t the first time—we’ve been talking about race since the oldest was 4, but the way I talk about it changed after Michael Brown. 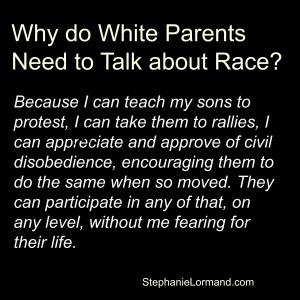 My hands shake almost too hard to type this. Why do white parents need to talk about race? Because I can teach my sons to protest, I can take them to rallies, I can appreciate and approve of civil disobedience, encouraging them to do the same when so moved. They can participate in any of that, on any level, without me fearing for their life.

That’s why I talk about everything despite the idea that I should protect their innocence. Protecting a child’s innocence by hiding violence? Do you do Easter? Hansel and Gretel? Rock-a-bye-baby? There’s violence all over what we teach our children, let’s not pretend that violence is the reason for why white parents don’t talk about race. The American reality is that being a black child– regardless of where they live– puts their life in more danger than either of my white children. That is not acceptable. 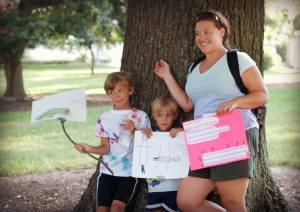 I’m a white, married, stay at home mom with a college degree, with a husband that generates enough income that I can work on writing my book rather than at a job. We’ve been broke, but not poor, and we’ve never experienced a financial catastrophe.Even if we had, both my husband and I have extended family able to provide financial assistance. I talk about the difference between my college experience—my working full-time versus roommates whose parents covered their living expenses. I tend to leave out the times when I needed quick cash loans from my parents. My husband didn’t work during the school year because he spent the summers, not at the beach or the pool, but scouting tobacco fields, or painting houses in the hot NC sun. Nevertheless, he kept all of that income, able to live with his parents who were financially able to absorb the expense of his room and board.
Even during the waves of jealousy for my friends and their spring break vacations, I quietly thought I was a better person because I worked and was high-level adulting, they were mere children. If anyone had asked me back then if I — financial-aid-receiving, independent-bill-paying, good-grade-getting — was equal to all students with those criteria, but without a parental safety net, I would have defended my answer of yes to the death.
I wouldn’t understand that simply being aware of my parents’ ability to provide financial assistance was a benefit to me regardless of whether I took advantage of it. I wouldn’t understand my own privilege until my junior year of college when, less than two months into my new position as a customer service manager of a grocery store, I tried to promote Beverly from office assistant to bookkeeper. After 4 years of being passed over because of scheduling restrictions, being promoted was a happy surprise to her. Her tears when I mentioned I put her in for a 25-cent per hour raise, an unpleasant surprise to me. She already knew that a quarter per hour would be just enough to push her over the top of the poverty line, eliminating her access to financial assistance. She did the math in her head, not only because was she intelligent, but also because she was an expert at down-to-the-penny-budgeting. To still pay rent and feed her children, to pay for the gas to and from work, without any state aid, she’d need a 35-cent raise. My corporate headquarters refused, they were already mad about the 25-cents. A dime– all that stood between her and the self-sufficiency demanded from single mothers by conservative political speeches.
Robbie worked all the departments and hours he was able–the poster boy for bootstrap pulling. He’d won a full tuition scholarship to ECU for the fall, but was joining the Marines instead. When he had applied, he didn’t know his foster parents planned to kick him out in May, because the checks stopped when he turned 18. He’d lived with them for 5 years, and had, until that moment in March, considered them his family.
Michael, a straight A high school student with no plans for college, already on the deferred Navy enlistment for after graduation. He worked any shift I gave him, and several times a week would either take the bus, or catch a ride to the store during peak hours, just in case somebody called out sick. If there wasn’t a shift, he’d do his homework in the breakroom for a few hours then go home. He called out once—the first bus had been late, causing him to miss the next, and his brother wasn’t home to give him a ride. I insisted over his protests on picking him up, driving my new-to-me red mustang less than a mile past the sleek apartments where the medical school students lived turning into a neighborhood that I knew only by reputation. The cop that followed me into the neighborhood continued to do so until I pulled up to Michael’s house, where he then parked so close to my bumper that I could nearly read his name tag. After Michael got in the car and I pulled away so did the cop, and when I wondered why, Michael said, “he thinks you’re here to buy drugs.”
“Oh, because of the car”, only to startle at the harsh laugh coming from the typically cheerful man-child in my passenger seat, “no, it’s because you’re white.”
Growing up within the circle of a large military base means exposure to racial and cultural diversity. Not just from my classmates, but also the teachers. Teachers are a set of first authority figures for many children. I didn’t grow up with the idea that black men were scarier than white men—all Army dads were equally terrifying. My first taste of the deep racial divide hiding in that town wouldn’t come until the county had to desegregate my middle school by busing out black kids and busing in the white kids.
Our schools were across the street from each other.
For all of the racial diversity from my teachers, my friends, and my neighborhood, the perspective I lacked– without even realizing it– wouldn’t come until those experiences with the Beverlys, the Robbies, and the Michaels in my early twenties. Race, when combined with a lack of economic opportunity in rural areas like Eastern North Carolina, results in a beast of inequity that can be nearly impossible to overcome. I knew this in theory, but that learned in class cannot replace truths lived in person. 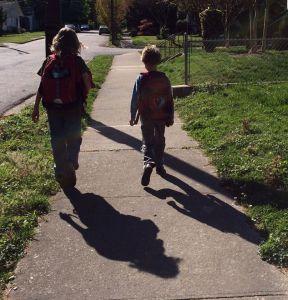 Just like that, it’s clear why the NRA never takes to the TV after a black person is shot saying, “this why black people need to make sure they protect themselves with a gun.” Have you heard them say that? I haven’t. Painting with the similar brush:

The most incredible part of this restructured wording is that it means almost all of mass shooting events have been the actions of a good guy, not a criminal.
We fear a black man with a book, but trust the white guy with a gun.

Words change, intent does not.
I’ve pointed out these differences in the media to both kids, and now the 9-year-old jumps up from reading Time magazine to show me examples.
Kids talk to each other, and they repeat what their parents say. My kid was the kindergartner ruining the happy version of Christopher Columbus, and I expect he’ll do the same for President’s Day. After all, the Founding Fathers story is America’s most famous piece of fiction. Do you feel the inspiration in your chest when you hear “all men are created equal”? Are you black, a female, or someone whose family does not have 400 years worth of wealth? Because if you answered yes to any of that—the founding fathers (whispers) weren’t talking about you, either.
White parents, if you find yourself wondering what you can do to end the cycle of racism in this country? Talk to your kids. Name it. Talk to your friends. Name it. And if you are afraid to talk about race with your kids or with other white people, imagine the fear felt by those living it.