Why We Lean Back 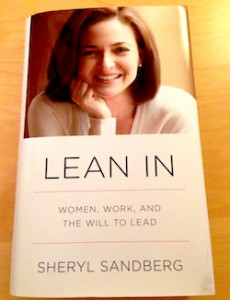 All right. I read it. The book that everyone, including my hero, Jon Stewart, has been talking about. So many reviews have been written about this book, that people have resorted to writing reviews of the reviews. The hype has been so incredibly, hyper—The Time story! The 60 Minutes piece! The banner ads! The web community!—that I was ready to harbor a deep dislike for this book. But that did not happen. At the risk of giving you Sheryl Sandberg fatigue, here are my thoughts, good and bad, on Lean In.

As you probably know from the title (Lean In: Women, Work, and the Will to Lead) the book is essentially advice for women who want to be leaders in the workplace. As with her 2010 TED talk, (which I wrote about here), Sandberg shares disheartening statistics about the lack of female leaders in business and government, and makes a case for why the world would be a better place if more women were in positions of power. Agreed.

Much of the advice resonated with me personally: We should expect more of our husbands and partners, and learn to give up control when they take the reins at home. Absolutely. We shouldn’t let double standards and sexist stereotypes hold us back. No, of course not. Women should spend less time judging each other, and more time making common cause. Preach it, Sister Sandberg!

She devotes a chapter on “speaking our truth,” and bringing our authentic selves to work, even if that means shedding a few tears from time to time:

Maybe someday shedding tears in the workplace will no longer be viewed as embarrassing or weak, but as a simple display of authentic emotion.

I thought it was brave of her to say so.

Her message about how women are less likely than men to tout their achievements, and how, chances are, they will be perceived as less likable when they do, has provoked a lot of important discussion and soul-searching.

Not so good advice

The main problem I have with Sandberg's book is her criticism of women who "lean back" at work, particularly when they begin to contemplate having a family.

“If my generation was too naïve, the generations that followed may have been too practical,” Sandberg writes. (p. 15) "Many of these girls watched their mothers try to 'do it all,'and then decided that something had to give. That something was usually their careers." She goes on to make a case for why women should reconnect to their professional ambitions, and give more to their careers.

Now I’m just a few years younger Sandberg, and the last thing the women I know need is to be chided for being too "practical" and protecting their energy and time. Women of Sandberg’s and my generation have made ourselves sick trying to manage the ridiculous demands placed on us.

What I'm trying to say is that in leaning in, many of us have given up too much. Often, those who achieve conventional success look back and wonder where their lives went.

Sandberg herself admits that although she leaves work at 5:30 PM to have dinner with her kids, she's always on. (p. 133)

Facebook is available around the world 24/7, and for the most part, so am I. The days when I even think of unplugging for a weekend or vacation are long gone.

I can't be the only person who finds that concept appalling. Why do we accept that reality as a given? One hundred and fifty years of research has proven that working more than 40 hours a week is bad for our health and bad for business.

The problem we should be talking about is why jobs in leadership—any job, really—require people to work such crushingly long hours, to never take any extended time off, and never ever—heaven forbid—unplug. When we frame the problem, again and again, around personal choices, we let the workplace, and society, off the hook. Anne-Marie Slaughter said it best in her very even-handed review of the book

. . .it is hard not to notice that her narrative is what corporate America wants to hear. For both the women who have made it and the men who work with them, it is cheaper and more comfortable to believe that what they need to do is simply urge younger women to be more like them, to think differently and negotiate more effectively, rather than make major changes in the way their companies work.

If the next generation is being more practical than ours, it’s because they’ve been presented with a false choice. When faced with choosing between work or life, most women (and many men) will always choose life. The point is, they shouldn’t have to choose. We need to stop pretending that long hours equals achievement. We need to stop pretending that we can work longer hours. We need to challenge the idea that to get ahead, you have to sacrifice your personal life. We need to acknowledge the health consequences to women who "lean in" in a country that expects us to work longer hours than people in any developed nation in the world.

It's not that Sandberg wants us to be slaves. One of her main points is that the workplace would be more humane if there were more women leading it. As she says, we have a "chicken and egg" problem. But she seems to think that if we ignore the hardship involved, that the problem will magically dissipate. For example, Sandberg says that the negative images of harried working mothers “make women unnecessarily fearful by presenting life’s challenges as insurmountable.” If we could just let go of that fear, she writes, we could “freely choose” to have both a personal life and a career. (p. 24)

Passages like these made me cringe. It’s a white-washing of our experience, as if those of us who feel tyrannized by the competing demands on our time are cowards. And those of us who talk about it are Debbie Downers.

This message is particularly hard to swallow coming from a woman who has a 9,000 square foot house and an army of household help. To be clear, I don’t think Sandberg’s privilege discounts her right to take on the issue of women and work, but I think it would be a lot easier to take if she would acknowledge what a profound difference this makes. (Instead, she has told interviewers that subject is taboo.) Most of us will never be able to afford that kind of help. Moreover, even if we could, many of us wouldn't want it.

I speak for myself here, but I know I'm not alone when I say that having my kids in full-time child care is enough. I don't want to hire a nanny to pick them up every day from school, or take them on the weekend so I can work. For most of us—women and men—having a degree of intimacy with the details of our children's lives is something we aren't willing to give up. It's the reason we became parents.

Ultimately, Lean In is a certain kind of medicine that will help a certain kind of person, most likely a very young person who has not yet had children, or may never have them. Women who need help getting their courage up to negotiate the next raise, or to ask for a promotion. But like most medicine, not everyone should take it.

In her introduction, Sandberg tells women to ask themselves: What would I do if I wasn't afraid? For Sandberg, the answer was to write her book. If you'd asked me the same question five years ago, my answer would have been, "Quit my job." Being told to "lean in" is the last thing I needed to hear.

Until society catches up to the changes in our homes, many of us will be better served finding way to push back.

Katrina Alcorn is the author of Maxed Out: American Moms on the Brink. (Sept. 2013, Seal Press)