Why Virginia Is Finally Waking Up to Gun Safety 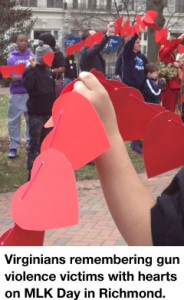 Legislating for gun safety has long been an uphill battle in Virginia, where even many Democratic lawmakers are allied with the gun lobby. In such an environment, the seemingly most outrageous proposals stand a real chance of becoming law. In 2009, for instance, the Virginia General Assembly voted to allow people to skip hands-on gun safety courses and fulfill the training requirement for concealed carry permits over the Internet. In 2010, it voted to allow people to bring concealed weapons into bars, restaurants and other venues that serve alcohol. This year, the 2014 docket includes issuing concealed handgun permits that never expire, and removing law enforcement’s discretion to stop people from obtaining federal firearms licenses to own Class 3 weapons such as bazookas.

Virginia gun safety advocates can be forgiven for feeling moments of futility that anything could possibly interrupt the Commonwealth’s long and unconditional love affair with firearms enough to actually get some commonsense restrictions in place. Take a few steps back, however, and there’s clearly light seeping in at the edges of the big black picture. From 2001 to 2010, guns killed more than 8,000 Virginians, and since 2010, the state has the 9th highest rate of women murdered by guns in the nation. When twenty percent of Americans across the country – that’s one in five Americans – know someone who has been a victim, or have themselves been victims of gun violence, even Virginians should begin to take notice of the heavy price of our lax gun laws. There are strong indications they are.

First, the vast majority of Virginians no longer passively accept the gun lobby’s absolute opposition to any tightening of firearms laws. A 2013 poll showed that more than 90 percent of Virginians support expanding background checks to reduce gun violence.

Then, in the run-up to the gubernatorial elections last fall, Terry McAuliffe, the Democratic candidate, openly declared his commitment to gun safety and famously said, "I don't care what grade I got from the NRA. As governor I want to make sure our communities are safe.” Despite heavy spending from the gun lobby against him, McAuliffe went on to win the governor’s office. With Ralph Northam and Mark Herring joining McAuliffe in the state house as lieutenant governor and attorney general respectively, gun safety lawmakers swept the Commonwealth’s statewide elections.

Finally and most recently, there’s the observance of Martin Luther King, Jr. Day in Richmond. For the last 21 years, the Virginia Center for Public Safety (VCPS) has celebrated the holiday with an afternoon vigil and advocacy for gun safety at the State Capitol.  The extreme gun rights group, Virginia Citizens Defense League, also hosts an annual MLK gathering earlier in the day at the same location. Yes, in a perversion of civil rights, on an occasion dedicated to honoring the life of a civil rights icon who died by an assassin’s bullet, the Commonwealth’s seat of government crawls with men packing heat, including assault rifles. But despite the flashy displays of weapons and aggressive posturing of the pro-gun demonstrators, theirs was a meager crowd this year, barely numbering 200. In contrast, later in the day, bus after full-bus pulled up to the State Capitol grounds to let off passengers who helped swell the gun safety crowd to more than 450.

The thing about the afternoon crowd was that is was made up of mothers, fathers, grandparents, aunts, uncles, neighbors, and friends, reflecting the growing new reality of gun politics in Virginia. Every single one had thought long and hard about the well being of someone else when they decided to go to Richmond to stand up for gun safety. Their motivation was love and concern for their families and communities, as opposed to the other side, driven by adherence to an abstract idea and passion for a cold, inanimate object. It is this human connection that’s making the difference and why Virginia is waking up to gun safety.