Why the Women of America Are Calling for Comprehensive Immigration Reform 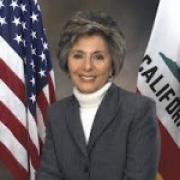 Senator Barbara Boxer
Share This
Add your voice to the comments

Like so many other Americans, I am proud of my immigrant roots. My mother came to this country as a child with her family from Austria. She never finished high school because she had to work to support her family. My dad was the only one of nine children to be born in America, and the only one to go to college.

When my mother passed away, I remember finding her Certificate of Citizenship, which she stored with other valuables in a small jewelry box. She kept it wrapped in plastic – the only document she protected that way – because it meant so much to her.

So the issue of immigration reform is very personal to me, and it is personal to the millions of immigrants who live in my home state of California and all across the country.

This week I was proud to join with labor and civil rights leader Dolores Huerta and other women’s rights advocates – including from Moms Rising – to talk about the urgent need to pass immigration reform that addresses the needs of women and their families. The event – part of a week-long “We Belong Together” campaign – allowed immigrant women to tell their stories and explain why we need legislation that provides a real path to citizenship for all 11 million undocumented immigrants in our country today.

Despite making up more than half of the immigrant population, too many immigrant women live deep in the shadows. They work hard and contribute so much to our country, but often live with their families in poverty. Because of their undocumented status, many face exploitation and abuse. They are more likely to be victims of domestic violence and they face staggeringly high rates of sexual harassment on the job – whether on a farm, in a private home or at a factory.

I know this because many of these women are my constituents.

Take, for example, Lupita, from Stockton, California. Lupita came to the U.S. with her parents when she was four, but without any documentation. Lupita couldn’t apply for financial aid to go to college, so she took a job as a caregiver to cover her expenses. The family she worked for exploited her labor—she ended up working all day, seven days a week, with no overtime pay. And she still lives in constant fear of being separated from her siblings and her parents.

Lupita is a DREAMer who will benefit from the temporary relief provided by President Obama’s deferred action executive order, but she still lives her life in limbo. And there are millions more women like her across the country who need comprehensive immigration reform now.

Immigrant women and their families deserve better. By creating a real path to citizenship, we will increase wages for workers, lift families out of poverty, and provide a boost for our economy – increasing GDP by $1.5 trillion and creating up to 900,000 new jobs over a decade.

As we work to reform our broken immigration system, I will be thinking of immigrant women like Lupita, and like my mother – women who work hard, sacrifice for their families and just want to give back to the country they love.

We need to help these women succeed and achieve their dreams – not make it more difficult for them. And we can start by passing legislation that keeps families together, protects women from abuse and exploitation, strengthens our economy, and makes America a better, more just country for all of us.