When Big Pharma “Strong” Arms Mothers, We All Lose

Kimberly Seals Allers
Share This
Add your voice to the comments

via The Broad Side

Corporations have a very bad habit of telling moms how to be. Or better yet, co-opting some very common “mom” archetypes for their marketing pursuits. For decades, we were told “Choosy Moms Choose Jif.” More recently, “It Moms” were more likely to choose a particular fabric softener. This week, infant formula maker Similac has taken on the dubious role of connecting their brand to “Strong Moms” — those supportive, they say, of a less judgmental environment for mothers. This new affinity for strength is being launched with a Strong Moms Summit on May 7th in New York City featuring a number of high-profile mom bloggers. 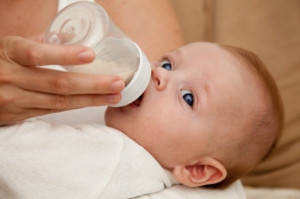 Please forgive me for being suspect. It is certainly true that there is way too much pressure on mothers today, and we all could take a proverbial “chill pill” on the mommy-bashing. But when a multi-million dollar pharmaceutical giant (Similac is owned by Abbott Laboratories) plows millions of dollars into telling mothers to be “strong” and “non-judgmental,” I think I’m rightfully engaged in a side-eye glance.

Selling women messages that sound good on the surface but actually undermine them has been a corporate tactic since at least the 1950s. We aren’t really being supported to be strong moms–whatever that means anyway — we are being sold the idea of “strong” as a marketing tool for corporate interests. There’s a big difference and all parents should take note of the dangerous undercurrents.

What I typically find most insulting is that these corporations are counting on moms not knowing better. That we are so weary from the pressures of motherhood, that we will hang on to any messaging that appears to be a “release valve” without delving one centimeter beneath the surface to find the real facts.

Apparently “strong” does not mean savvy.

Because one centimeter beneath the surface of Similac’s “Strong Moms” Summit and online campaign you will find that framing of infant formula use around a “lifestyle choice” that is not to be judged has been its primary marketing strategy for decades. Ah, choice. It used to be such a powerful word–one that conjured up women’s suffrage, the feminist movement and our battle for reproductive rights. The problem today is that “choice” has been taken out of the context of women’s rights and misconstrued into a dirty and insidious word. In its most disgusting reiteration it is being marketed to women and girls by corporations — in this case, by infant formula marketers, who are more concerned with profits than infant health outcomes. Women have been led to believe that the “choice” between formula feeding and breastfeeding is merely a matter of inclination–a personal decision, a feather in the cap of liberation. And since choices are individual, they have no social consequences; women are therefore relieved of responsibility of considering the broader implications of their decisions. And once I make my choice, no one is to challenge me. We can’t talk about it. And if you do, you are judging me.

This is dangerous territory for all women and mothers as the issue of breastfeeding vs. formula feeding is turned into a mere lifestyle choice as opposed to a child health matter. No wonder Similac is supporting so-called non-judgment.

What is really happening is that by leaving each other alone in our so-called non-judgmental circles, we are simply leaving the current unjust system in place and discouraged from forming opinions about the value of different choices. With this type of continuous marketing messaging, we lose the ability to have critical discussions about where the real choices lie and which “choices” are merely illusions. Most problematically for the future of mothers, it deters us from addressing the systemic problems such as improving child care options, increasing the market for part-time work, the lack of a paid federal maternity leave, and other deep-rooted, anti-family policies that actually devalue mothering and shape our infant feeding choices, and prevent us from being active agents of change because we are being told that many aspects of mothering from our infant feeding to work decisions are “choices” and, therefore, private matters.

Choice becomes the silencer on a dangerous handgun.

In this context, choice is not liberation. It is suffocation. In this context, Similac is asking moms to be strong when they really want us weak and silenced. Framing the infant feeding conversation as an empowerment experience erases the context of corporate interests and deep pocketed marketing machines that have always put profit motive ahead of infant health and the health of mothers and our actual empowerment, for that matter.

Let’s face it, this isn’t the first time that women have been sold on an ideal that sounded good on the surface but was actually manipulated to undermine them. It’s been over 50 years since Betty Friedan’s The Feminine Mystique ripped the veil off the problem behind a very good-looking pretense of waxed floors, perfectly applied lipstick and domestic bliss in the 1950s to help women breakthrough a malaise they didn’t know existed. At that time, the idea that women were naturally fulfilled by devoting their lives to being housewives and mothers was borne out of similar cultural forces and commercial interests. It was presented as if this was the woman’s choice, when in fact cultural forces dictated that preparing for marriage and motherhood even from the teenage years was her only option.

Meanwhile, the dialogue around the real issues that could actually significantly impact our lives and the health of all infants has been suffocated while we clamor behind choice and non-judgment and use it as a shield to deflect our mommy guilt. Our ability to build conversation and support among each other has been quashed because we won’t discuss what we have been told is a private choice. With so much individualism embedded in our views about choice, there is little room for examining interdependence or acknowledging individual fallibility of our choices.

It is women and infants who are paying the price for this so-called freedom of choice.

Until “choice” is presented with accurate information, then choice is just a mirage. What’s more, we have to understand the difference between choice and options. Having unequal options doesn’t make for true choice. And truly strong moms don’t need big pharma’s underhanded and predatory marketing ploys under the guise of a summit. Thanks, but no thanks.

Kimberly Seals Allers is an award-winning journalist, author and a nationally recognized breastfeeding commentator and advocate. She is currently a Food & Community Fellow with the Institute for Agriculture and Trade Policy and a popular speaker and consultant. Her fifth book, an in-depth examination of the social, political and economic forces shaping the American breastfeeding landscape will be published by St. Martin’s Press in 2014.