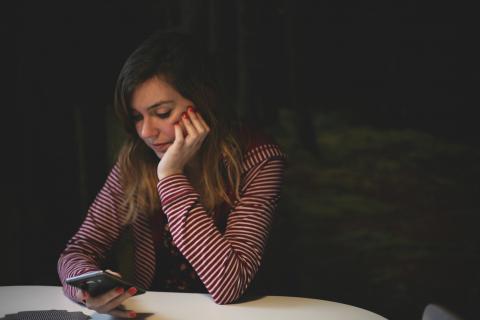 What Parents Need to Know About Social Media and Anxiety

From cyberbullying to FOMO to cruel comments, social media can be a land mine for kids. Issues we parents never had to worry about, such as an intimate photo texted to the entire school or Instagram videos of a birthday party we weren't invited to, are now a risk for many tweens and teens. With kids' digital well-being a concern, researchers are exploring potential links between social media and the rise in teen suicide rates, tech addiction, and loss of real-life social skills. And many parents are wondering: Is social media causing my kid to have anxiety?

It's an important question -- and one that makes for compelling headlines for worried parents. While it's too early to say with certainty (this is, after all, the first generation of "digital natives"), the reality is somewhat nuanced. Some research has observed a relationship between social media use and anxiety in kids, but it's difficult to know if and when social media is causing anxiety or whether kids who are anxious are turning to social media as a way to soothe themselves or seek support. How kids use social media matters, too: Social comparison and feedback-seeking behaviors have been associated with depressive symptoms, which often co-occur with anxiety.

Of course, it's common for kids to feel anxious sometimes. But there's a big difference between occasional anxiety and an anxiety disorder that requires professional care. If your kid is overly self-conscious, has uncontrollable and unrealistic anxiety, is unable to make it go away, and avoids things, you may want to seek help. (Learn more about anxiety in kids at the Child Mind Institute.) For these kids, social media may act as a trigger for -- though not the root cause of -- their anxious feelings. There are also kids, who, for a variety of reasons, may be more sensitive to the anxiety-producing effects of social media. For example, kids with social anxiety disorder may prefer online interactions over face-to-face interactions. Bottom line: You may not know the impact of social media on your kid until issues surface.

Unfortunately, simply cutting off social media isn't necessarily the answer. It's such a huge part of many kids' lives that not having access to social media could take a toll. In fact, being connected to friends through social media may counterbalance some of its negative effects.

Without conclusive research to back up claims that social media causes anxiety -- and some evidence to show it's beneficial -- it's up to you to keep tabs on how your kid's doing. Though it adds an extra layer to your parenting duties, it's a good idea to get a good sense of your kid's online life. Ask kids to give you a tour of their social media world. As they're showing you around, you might hear some of the positive stuff you weren't expecting, as well as some of the problem areas your kid could use help with. Also, add social media to the "wellness checks" that you already do. For example, when you ask how they slept and what they ate, ask how they're feeling about social media. Is it mostly positive, helpful, and supportive, or do they want to step back but aren't sure how? Here are some more tips for keeping social media a positive for kids:

Encourage self-care. Seeing photos of a trip to the beach your friends didn't invite you to can really sting. If your kid is super bummed or tired of digital drama, suggest they take a break from social media for a while. In fact, if they post a status update that they're taking a break, their friends might be very accepting because they've had similar feelings.

Help kids put social media in perspective. People post stuff that makes their lives look perfect -- not the homework struggles, or the fight they had with their dad, or the hours it took to look as good as possible for the camera. Remind kids that social media leaves the messy stuff out -- and that everyone has ups and downs.

Encourage offline activities. In a world where kids could spend their days lying around looking at Instagram, it's doubly important for them to feel as though they're cultivating their inner lives. Prompt them to balance social media with soul-nourishing activities such as hobbies, exercise, reading, and helping others. Otherwise, what are they going to brag about on social media?

Talk about their feelings. Ask them what it feels like to look at other kids' feeds. Is there a tipping point from when they feel OK to when they start to feel bad about their own lives? Encourage them to stop before that feeling sets in and do something good for themselves instead.

Let them know you're there for them. You may not understand everything about your kid's online social life. But recognizing it's important to them makes your kid feel valued -- and more likely to come to you when they encounter problems.

Get help. If you see any cause for concern, including mood swings that seem to result from social media, not taking pleasure in activities he or she used to enjoy, and having accompanying symptoms such as headaches and stomachaches, visit your kid's pediatrician for a professional opinion.

The Child Mind Institute contributed to this article. Learn more at childmind.org.